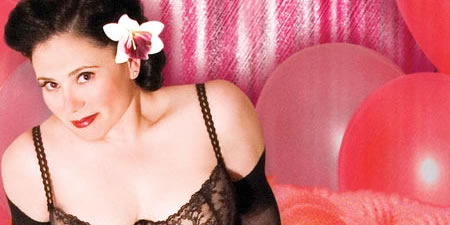 The world is about to get a lot more Alex Borstein, and this is a wonderful thing. The former MADtv actress who currently voices Lois Griffin on Fox‘s Family Guy — among others — just announced that she and Seth McFarlane are working on a new animated series. It will have a female lead character, voiced by Borstein, a first for McFarlane and Fox, and a rarity in an animated show. No dates yet, but Borstein also included some Family Guy news in her announcement. This is more exciting than that time I ran an amusement park for dogs! [CUT TO: Jamie Frevele, running an amusement park for non-anthropomorphic dogs, who are wearing fanny packs and looking at park maps.] Anyway, back to the actual post!

In an interview with Digital Spy while promoting the 11th season of Family Guy being released on DVD, Borstein confirmed the new project, saying that the last time she recalled a female lead character on an animated series not-intended for kids, it was one of our MTV favorites of yore, Daria, which aired from 1998 to 2002. And while no dates have been set — nor a title, nor a premise — Borstein mentioned that along with her and McFarlane, Gary Janetti will produce. Janetti has written for Family Guy and was an executive producer on Will and Grace. And it sounds like they are just waiting on bated breath to get started on this thing:

We’re kind of raring to go and just waiting to get the green light to start setting up and writing – so it’s very exciting!

You can practically feel the total psychedness, can’t you? Borstein, who first joined Family Guy when there were no female writers, eventually became a consultant, and has been writing for it for years now. But she disclosed that she was almost not the voice of Lois. When the show was first being developed, she provided Lois’s voice for the pilot presentation before the show was picked up for series. But then, she had a fight on her hands:

“[A]fter the show got picked up to series, they were like, ‘We’ve never heard of this person – maybe we should see everyone else who’s ever been in showbusiness’ and so they proceeded to have a series of auditions. Literally, every person that has ever had a f**king Screen Actor’s Guild union card was on the couch to audition for the part!

“It was pretty close – there was another woman that some other people involved wanted, and Seth was fighting for me. Thank God, he prevailed!”

Seriously, anyone else as Lois? Who were they looking at for that nasal Nawtheastern cadence, Amy Ryan?

Anyway, more Family Guy news: Borstein says that the show could run for “four or five more years,” and that there may be a full-length feature film to cap the whole thing off in the end. Though Borstein thinks it shouldn’t have to wait until then, that they could do this Simpsons-style and continue the show after making a movie.

But the real news: two of the funniest people in animation are making a new series with a female lead. And — The Cleveland Show aside — who better to take this on than Alex Borstein and Seth McFarlane?