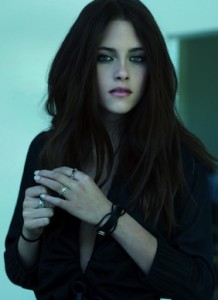 Last month, we heard that the American (read: white) remake of Akira was back on, and that Garrett Hedlund (Tron) was in the running to play either Tetsuo or Kaneda. Well, it might be getting even whiter. While it’s not official yet, producers have apparently offered Twilight actress Kristen Stewart the role of Ky Reed, the woman who is aligned with an anti-government movement. So, basically, the producers of Akira are letting us know exactly who their audience is going to be: the CW crowd. Great. So, we’ll be hearing about all those Gossip Girl kids getting offers to be part of a Japanese street gang now. This is the world we live in.

Okay, for one fleeting moment, let’s give Kristen Stewart a little bit of credit. She’s played more roles than that of the swooning Bella Swan. In fact, she’s been looking pretty badass in Snow White and the Huntsman and wasn’t too shabby playing rocker Joan Jett in The Runaways. (Even Joan Jett said so.)

So, we’re probably more peeved about the continued whitewashing of the Japanese classic. Even though the producers of the original are on board for this adaptation; Katsuhiro Otomo himself is an executive producer. But let’s be honest — this will never not feel icky in some way.

As of right now, Stewart’s casting is not set and they are in the latter stages of negotiation, but still without any official announcements. But maybe it’s time we can start having a little more faith in Stewart as an edgy actress. She did, after all, punch Chris Hemsworth in the face.