Scientists Can Make Gas From Air, Water, and… That’s it!? 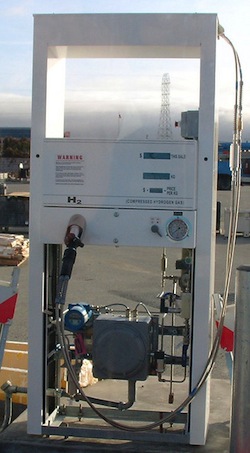 Finding an alternative to burning fossil fuels has to be one of the single largest issues facing our world’s scientists today. Cleaner, cheaper fuel may not be able to bring world peace, but it would be a major step towards staving off an environmental and/or political apocalypse. It’s surprising, then, that we haven’t heard more about the research at Air Fuel Synthesis, a British engineering company that claims to have discovered a way to refine cleaner-burning fuel using only water and air.

According to the team at Air Fuel Synthesis, their process synthesizes carbon dioxide and hydrogen in a reactor, then uses a catalyst to turn the fusion into methanol. Methanol can then be converted into gas. The process is product of a two-year, one million pound (about $1.6 million) study.

In addition to being made from more abundant resources, AFS believes that synthetic fuel will have a much smaller impact on the environment. Since synthetic fuel is made using only the exact elements required to create methanol, it doesn’t contain impurities that lead to the negative byproducts of burning fossil fuels. By using renewable energy sources in the refining process, AFS claims to have found a way to make large quantities of “carbon-neutral” fuel.

According to AFS, engineers have created five liters of synthetic gasoline in the last three months. That may not seem like a lot, but according to Air Fuel Synthesis CEO Peter Harrison, it wouldn’t be difficult to massively expand the scale of production. Apparently, the individual steps of the refining process are already used in the mass production of other products.

Unfortunately, there’s currently no plan to ramp up production to compete with traditional fuel suppliers. For now, AFS will build a refinery that will produce fuel for race cars and other vehicles that require specialized fuel.