Agents of SHIELD Recap: “Heavy is the Head” 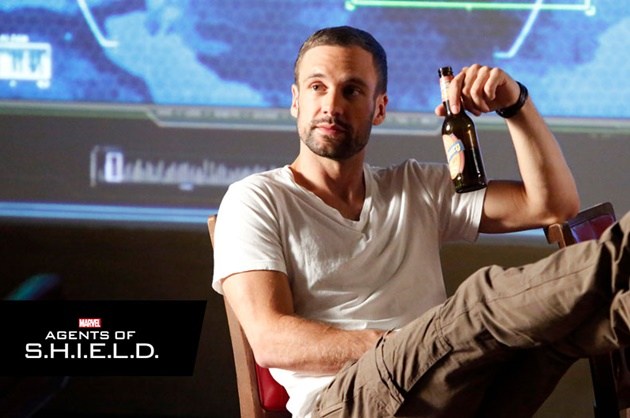 “Heavy is the Head” was part two of the season premiere, picking up exactly where the first episode left off. Where “Shadows” was filled with lovely character moments and personal development (promising a more character-focused second season), this week’s episode suffered from having to do the business. “Heavy is the Head” was heavy in the plotting, but I can forgive it. They have a whole season’s worth of plot lines to set up, and I’m just glad it wasn’t all crammed into the premiere.

[This recap, as with all our recaps, contains spoilers for the episode, so fair warning. ]

Our new merc team has been decimated by half after that car crash – and, yes, Izzy was fully buried in this episode, so if we’re going to be seeing more of Lucy Lawless on SHIELD she’s either going to be a different character, or clawing her way out of the ground like it’s an early episode of Buffy. On the other hand, Nick Blood’s Lance Hunter (which I can’t believe is something real that I just typed) came into his own (especially now that Idaho is dead so I can tell them apart), displaying the motivations behind his less-than-savory actions; and, eventually becoming an honest-to-goodness member of SHIELD. It’s interesting that SHIELD seems to have replaced Ward with, not just one, but three new dude characters: Tripp, Hunter, and Mac. I’m just saying, maybe Hunter could have been an awesome lady? Or maybe he could have died instead of Izzy? Because then we would have had a queer lady on the squad? But hey, there’s always hope for the future, I guess.

Ward was actually noticeably absent for this entire episode – which, I’m not going to lie, was pretty great. I love the direction the SHIELD writers are taking with Ward’s character based on the previous episode; but I’m also wary of them making him back into a good guy. A little more time with Ward locked away in the dungeon just feels right. Mac, the world’s hunkiest mechanic, also got a little more characterization in this episode, as he was the only dude on the whole team who treats Fitz like he’s still a human being. Skye and Tripp walking on eggshells around the scientist does him no good; it’s only Mac, who – while blunt – treats Fitz like he’s still Fitz, who can get some progress out of my tiny Scottish prince. It was actually quite a poignant look at behaviour around people with health problems or disabilities. Meanwhile, I’m still crying over Fitz because my poor tiny Scottish prince. 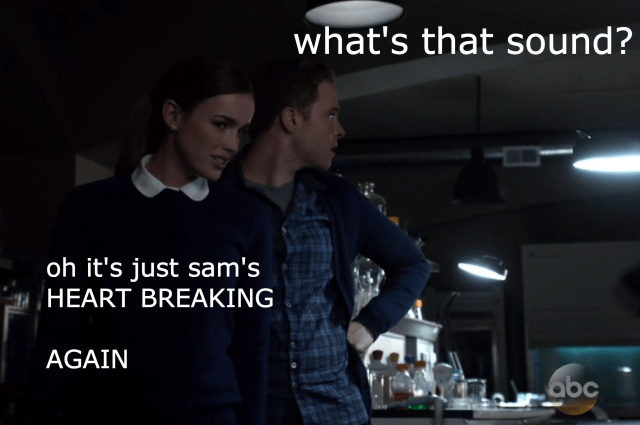 On the other end of the “I want to hug you until it’s better” spectrum, Skye is back to her usual irritating antics (that didn’t take long!). Hopefully it’s just a single-episode anomaly, but I really can’t stand characters who are too obsessed with their own feelings to empathize with anyone else. Her best moment this episode was clearly the penis joke. 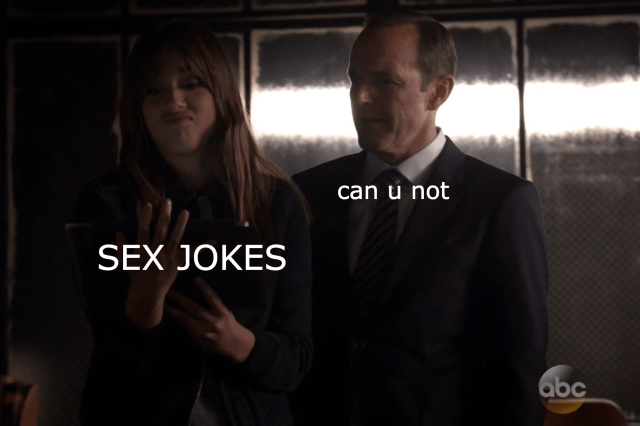 Sure, Skye is worried about Coulson, but she’s also clearly demonstrated over these two episodes that she misses her Spy Daddy bonding time. Sorry, Skye, but Coulson’s kind of busy, you know, being the director of an almost-nonexistent organization and drawing weird alien shit all over the walls. 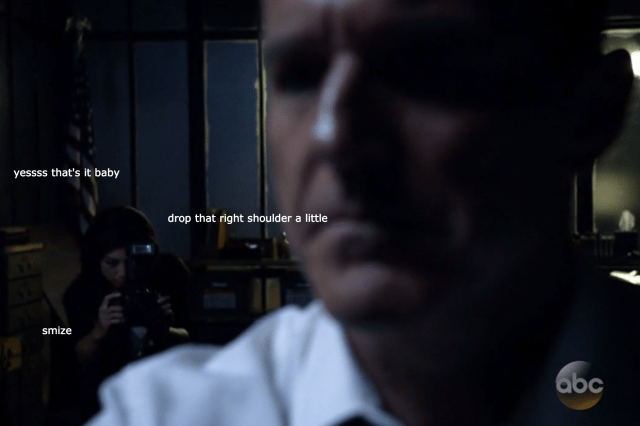 Does SHIELD seriously not have enough in the budget to get this man a dry-erase board?

Honestly, though, I’m glad to see Coulson is subverting the “everyone has a deep, dark secret” trope and just straight-up told May about his little alien problem. Coulson is a man of SHIELD even in his moments of crisis; he knows by allowing May to document his drawings and his “episodes,” they might be able to find something in them which could help Earth in the future. None of this “sulking alone because it’s manly” business for Coulson. He knows what’s up. 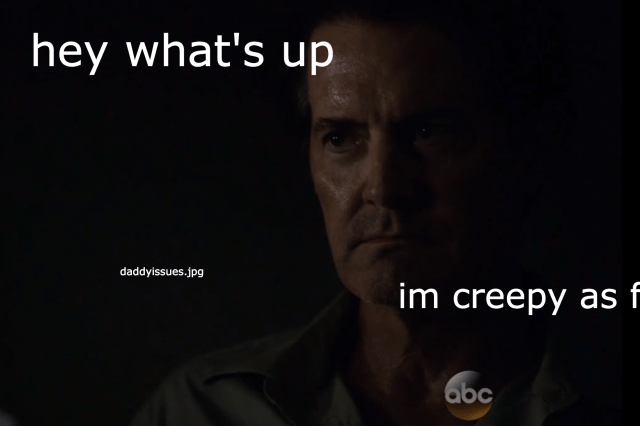 Plus, Skye won’t even need Spy Daddy once Actual Super Creepy Daddy shows up to re-introduce himself! I’m also glad to see Raina back in this episode; she was my favorite part of the first season of SHIELD, and I like that she’s moved on in her quest for answers to Mr. Skye. Admittedly, I would love to see Raina as the big bad, eventually, instead of the sidekick to a bunch of dudes, but I’m hoping that’s coming down the line. 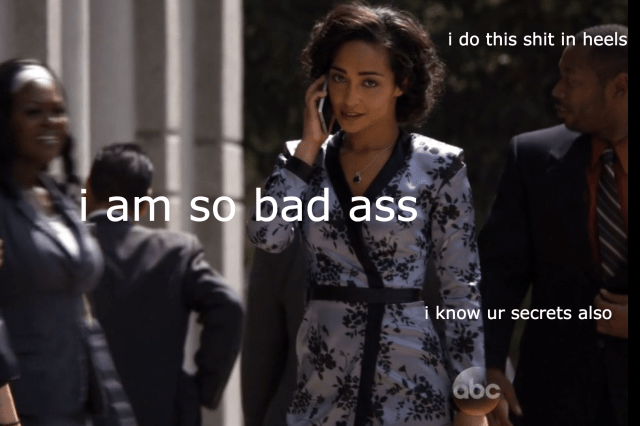 We got another Peggy cameo this episode, an image in Coulson’s office, which is always nice to see. I must say, though, I’m starting to worry a little bit about the integration and focus on Peggy and Agent Carter; I would hate to see the first half of the second season of SHIELD basically just become a big set-up for the Agent Carter premiere, in the same way the first half of the first season of SHIELD was just a set-up for The Winter Soldier. 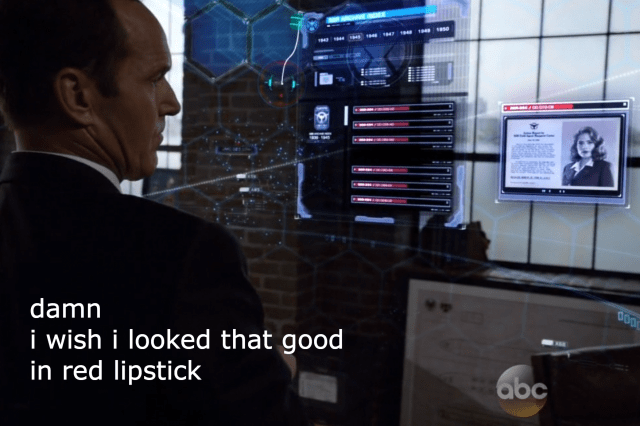 Oh, and one last thing about last week’s episode, before I let you all go: it was a Kree in the box at the beginning of the episode, right? This guy? 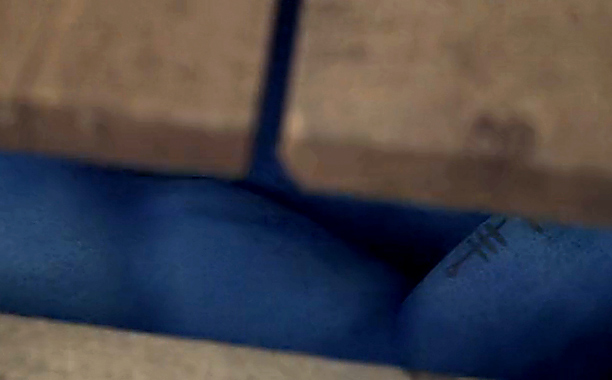 I’m just saying, give him a good face paint job and a very attractive voice and that’s definitely someone who could easily pass for Ronan the Accuser. EW picked up on this and asked Clark Gregg for a comment, to which he responded: “That’s amazing that you picked up on that. That’s un-kree-lievable.” Puns.

And, of course, there’s this tidbit from Gregg’s Facebook, too:

Where can I start the petition to have the Guardians of the Galaxy show up on SHIELD? I mean, Chris Pratt mostly does TV anyways. It wouldn’t even be a big deal. Let’s make this happen, team. Get on it!