AGENT OF S.T.Y.L.E. - Black Widow Goes To The Movies | The Mary Sue

AGENT OF S.T.Y.L.E. – Black Widow Goes To The Movies

It's all about the details! 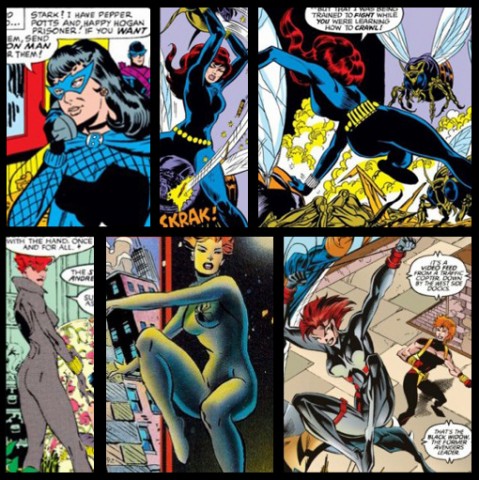 A while back, we did an Agent of S.T.Y.L.E. dedicated to the many comic book costumes worn by the Black Widow. Natasha Romanova has had a long history in the comics, so it’s natural that she’s felt like changing her suit now and then. Her most prominent look, the simple black bodysuit, was inspired by the Golden Age hero Miss Fury (though in-universe, Natasha credited Spider-Man and Jean Grey’s original outfit as her inspirations). This bodysuit has been seen in three movies now and will be seen again in Avengers: Age of Ultron. But the movie suits are not identical! Let’s take a closer look. 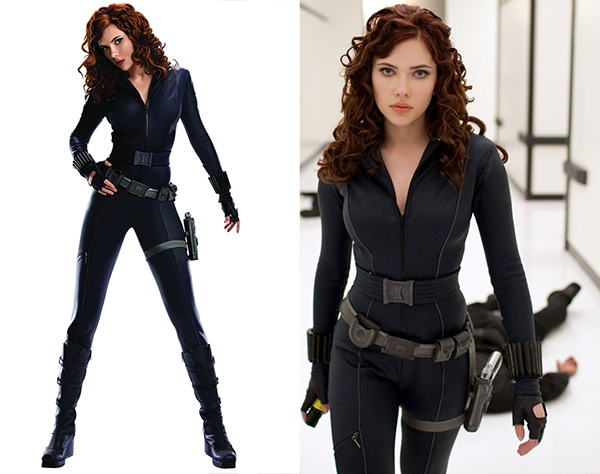 The Black Widow was introduced into the Marvel Cinematic Universe (MCU) in Iron Man 2 in 2010. The costume designer was Mary Zophres, who has worked on films such as Fargo, Ghost World, True Grit, No Country for Old Men, and Interstellar. She was introduced as Tony Stark’s new secretary Natalie Rushman (referencing an alias Nat once used in the comics during a time when she was amnesiac and fell in love with Spider-Man). She later abruptly revealed her true identity as the SHIELD agent named Black Widow and then kicked a little ass. 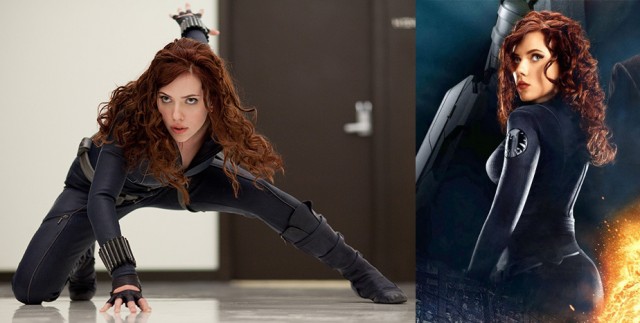 This costume seems to very much be about creating a form-fitting silhouette for actor Scarlett Johanson. The belts don’t interfere with the silhouette much at all, except for the holster. This looks a little more like a dancer’s outfit than combat gear, and the hourglass belt symbol can barely be seen in some light. It’s almost there as an afterthought. Meanwhile, the seams draw  your eyes down across the whole figure and Black Widow’s curves.

All of this complements the fact that Iron Man 2 focused on Nat as a seductive femme fatale. Her first scene included a look at modeling photos and she deliberately flirted with Tony in order to get his trust. Along with this, the movie posters focused on her sex appeal and one of the main ones put her in the classic butt-towards-audience pose with the chest turned to be in view as well.

All that said, this is a pretty good adaptation of the original 1970s black bodysuit, which had a silver-gray belt and no hourglass symbol. The bluish tone to the movie costume also recalls (intentionally or not) the blue highlights comics often used to give the Black Widow suit some texture and depth. 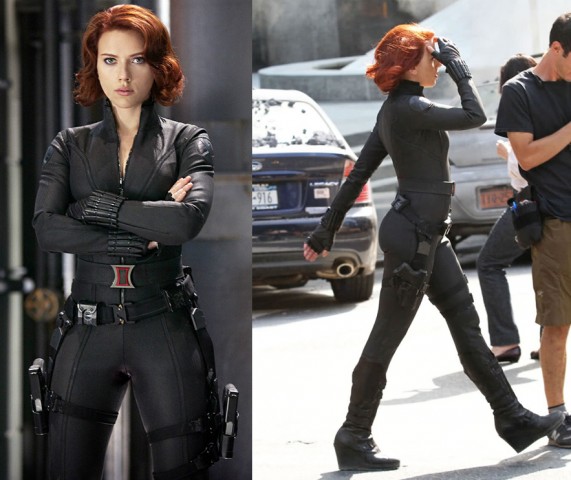 In 2012, The Avengers was released to theaters and the Black Widow sported a slightly different outfit designed by Alexandra Byrne, who also did costume design on Guardians of the Galaxy, Thor, and Elizabeth: The Golden Age, as well as for the upcoming films Avengers: Age of Ultron and Dr. Strange.

Byrne wanted to emphasize the Black Widow as a field agent for SHIELD. The zipper is raised higher. Areas are padded not only to help with combat stunts but to tone down the actor’s curves. The belts and bracelets (the Widow’s Bite) now look more utilitarian rather than accessories designed to complement the silhouette. The hourglass belt buckle is more prominent and the SHIELD patch on the shoulder has been updated. The seams are now flat felled and don’t draw your eyes the same way the previous costume’s did. 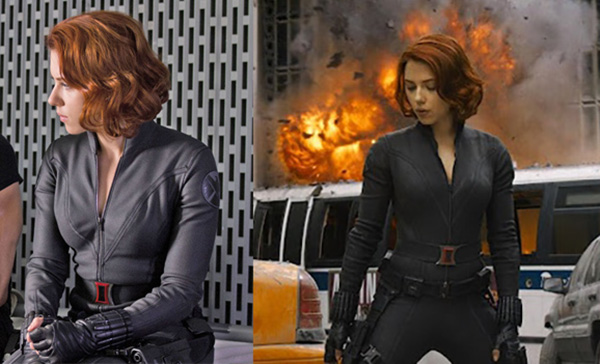 While the Iron Man 2 costume looked tailored specifically for the Black Widow, this outfit seems like it might be more of a standard uniform for any SHIELD agent of her size and height. Which does make a bit more sense, as it seems unlikely that Nick Fury set aside part of his agency’s budget to make sure all the outfits were tailored to be as form-fitting as possible. At the same time, the fact that the actor’s curves were deliberately toned down has led some to criticize that the design (intentionally or not) reinforces a belief that a woman must appear less feminine in order to be taken more seriously as a formidable fighter. I leave you folks to debate that for yourselves.

In 2014, the Scarlett Johanson co-starred in Black Widow & Captain America: Let’s Kick Some Ass. Oh, I’m sorry. It was actually titled Captain America: The Winter Soldier. The Black Widow once again sported a new version of her SHIELD uniform, this time designed by Judianna Makovsky, who has worked on films such as The Hunger Games, The Last Airbender, X-Men: The Last Stand and Harry Potter and the Sorcerer’s Stone.

The Black Widow uniform here is once again more form-fitting like in Iron Man 2. That SHIELD patch got a lot smaller, the zipper’s a bit lower, the seams once again go down the whole body, and the Widow’s Bite bracelets seem decorative once again. But there’s also a utilitarian nature with padded areas for combat protection and more belts to carry weapons, similar to her costume in The Avengers. This seems to be a compromise between the two earlier designs.

Interestingly, the Black Widow barely wore her uniform in this film. The rest of the time, she adopted a variety of plain clothes looks. My personal favorites involved her wearing some great looking leather jackets. Natasha doesn’t need a special suit to be able to take you down, bad guys. She can do it in any outfit she wants. 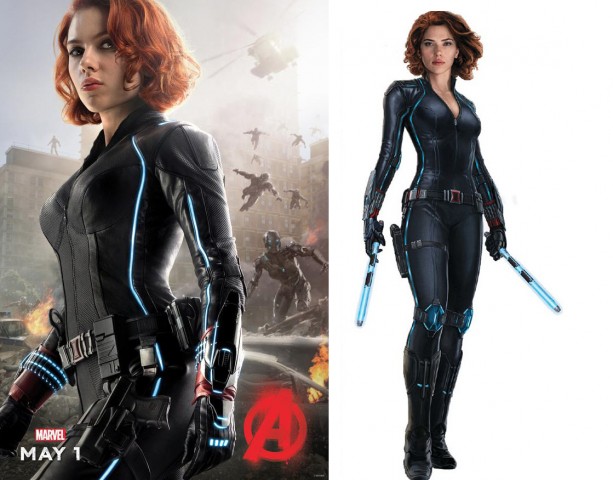 Alexandra Byrne is back for the second Avengers movie but she hasn’t just dusted off the costume she used before. She’s made improvements. It may have some people making Tron jokes, but now Natasha’s suit looks powered up and ready for action that needs a superhero rather than a spy. Considering she lives in a world where Tony Stark can make amazing miniaturized technology, I don’t have any problem believing the Black Widow can get herself a uniform that has built-in power sources to charge up her Widow’s Bite bracelets or her new energy batons. 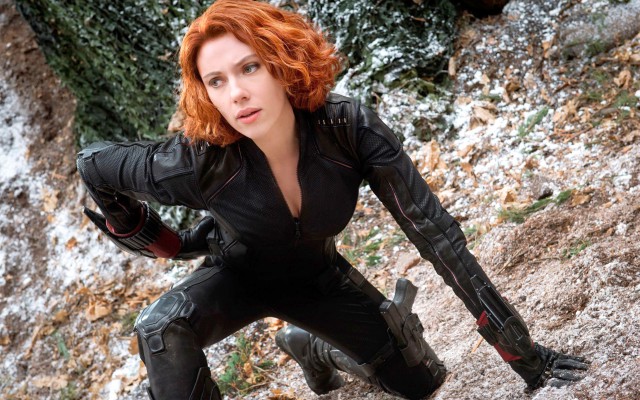 The bracelets have been replaced with bracers and they, along with the new kneepads, make this seem less like a catsuit and more like personal body armor. That’s not a bad thing at all. I also love that there’s now one Black Widow utility belt with an hourglass buckle as opposed to one belt that has a purpose and one belt that is there just so you have a place to put the hourglass. The added red areas further enhance Black Widow as a superhero rather than a spy, which could be symbolically calling back to the events of Captain America: The Winter Soldier and her shifting views on leading a life that focused so much on cynicism and deception.

Whatever the case may be, Black Widow looks ready to rock for Avengers: Age of Ultron. That’s all for now, folks! Let us know which outfit you like the best in the comments.

Alan Sizzler Kistler (@SizzlerKistler) is the author of the New York Times Best Seller Doctor Who: A History. He is an actor, host, comic book historian and geek consultant who has recently relocated from NYC to LA. Archives of his work can be found at: AlanKistler.com