Spider-Man has one of the best rogues galleries of any superhero. His villains are nuts, offering a variety of story flavors, but one of the guys I’ve been waiting to see brought to the big screen is Max Dillon, AKA Electro. This summer, Jamie Foxx portrays the galvanized would-be gangster in the upcoming film Amazing Spider-Man 2. So let’s take a look at this villain’s fashion choices in the mainstream comics over the years, shall we?

Electro first appeared in Amazing Spider-Man #9 in 1964, designed by Steve Ditko. If there’s one thing Steve Ditko loved, it was making sure that Spidey’s enemies wore green. Mysterio, the Vulture (are there green vultures in nature?), Sandman, Green Goblin, Scorpion, Dr. Octopus, the Lizard (ok, that was his skin, but still); all of them rocked the green. So Electro, wanting to fit in, also got himself a green bodysuit, along with yellow shorts, gloves, boots, lots of lightning designs and – WAIT, WHAT IS THAT MASK?

I understand that Electro wants a lightning motif. He can hurl lightning and often has an electrical aura around his body that shocks anyone trying to touch him. But man, that mask. Seriously, Electro, how many lightning bolts did you need decorating your face? You realize you can create REAL lightning around your face and body whenever you wish, right? Depending on who’s drawing you and where you’re standing, it looks like there’s a very shocked starfish stapled to your cowl. Moving on . . .

Strangely, it seems that Electro got himself a fan, as evidenced several years later by a super-villain named Blackout (not the vampire guy in Ghost Rider comics, he came later). Blackout did not have electrical powers at all, his talents dealt in manipulating “darkforce” energy, but this didn’t stop him from basically ripping off Electro’s costume, replacing the green with nicely-slimming black and editing down the lightning bolts. Yet even with just one lightning bolt on his face, Blackout doesn’t look much better.

For those of you curious, Blackout later died of a brain hemorrhage, then impossibly showed up many years later in issues of New Avengers and Siege, because someone on the creative side forgot he was dead.

Over the years, Electro’s look occasionally underwent some minor alterations. Some made the mask lightning smaller. Some took away the black cowl and neck lining, while others added a gold border to the black section. A couple of artists crisscrossed the lightning on his shirt so that it looked like he was wearing bandoliers rather than suspenders. Some added gauntlets or took away the shorts-over-trousers look. Some comics took away the mask entirely. But the original Ditko design was always present in some way. 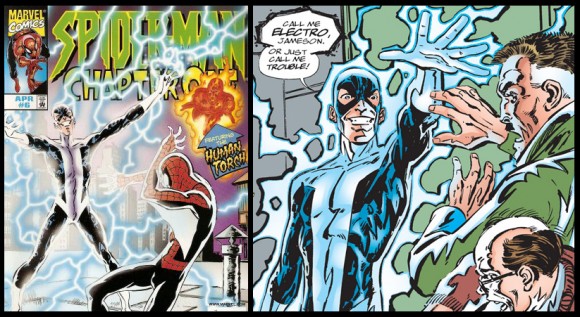 In the late 1990s, writer/artist John Byrne did Spider-Man: Chapter One. The idea was to modernize and alter Peter Parker’s early days as the web-slinging wonder. For instance, the original comics said that Uncle Ben Parker was killed because he interrupted a simple burglary; Byrne’s version said the burglar’s actions were an attempt to impress Spider-Man, whom he believed was a criminal. With Electro, John Byrne totally threw out Ditko’s design and gave us this white and blue-black number.

I believe the French word for this outfit is “lame.” Electro just took Spidey’s costume, then removed color and originality. There’s nothing interesting about this suit at all. Spider-Man: Chapter One, as a whole, didn’t go over well. Soon after it ended, Marvel Comics decided that the series and its continuity changes never happened.

Starting in 2000, Marvel created a new line of books under the banner Ultimate Marvel. Unlike Spider-Man: Chapter One, the new series Ultimate Spider-Man was not a revision to previous continuity but the introduction of a new parallel universe where Peter was just starting his superhero career, under different circumstances. Ultimate Spider-Man #10 (2001) introduced a new version of Electro.

This is a more pragmatic approach to the villain. A rubber suit that doesn’t conduct electricity won’t ignite from the personal electrical aura that caused his hair to burn off. The only real costume element to him is the cutout lightning bolt. Half the time, this version of Electro wound up fighting while naked, his blue aura conveniently hiding his shame.

Max Dillon often shows up in cartoons, and in the 1966 series The Marvel Super-Heroes (this was before DC copyrighted using the word with a hyphen), a mostly naked and tattooed version of Electro made a cameo in “Dr. Doom’s Day.” That is one freaky version of Electro, people! A while later, in the original Spidey cartoon series, Electro (voiced by Dan Harvey) showed up in a more classic look. Although, similar to the heroic protagonist, his shirt lost its comic book detailing. In the 1980s show Spider-Man and his Amazing Friends, Electro was voiced by Allan Melvin and wore a blue and yellow version of the Ditko suit. Blue and yellow ain’t a bad combination.

Electro didn’t initially appear in the 1990s Fox cartoon Spider-Man: The Animated Series. James Cameron had hoped to use the villain (along with the Sandman) in his own attempt for a grim and gritty live-action film, so the cartoon didn’t want to step on his toes. The film’s version of Electro would’ve been named Cartlon Strand, a wealthy industrialist who gains electrical abilities. After a couple of years, it was clear this movie wasn’t going to happen, so Spider-Man: The Animated Series finally introduced its own version of Electro who didn’t bother with yellow trunks. Rather than “Max Dillon,” his name was Rheinholt Schmidt and he was the Red Skull’s son. That’s one of the more bizarre changes to the mythos that happened on that cartoon series. Rheinholt was voiced by Philip Proctor.

Following the first Sam Raimi directed Spidey film, MTV made the CGI Spider-Man: The New Animated Series, starring Neil Patrick Harris as Peter Parker and Lisa Loeb as Mary Jane Watson. Electro (voiced by Ethan Embry) showed up as Peter Parker’s classmate Max Dillon, who becomes a being of living electricity and goes a little nuts. No real costume, he’s just made of electricity and has a funky lightning like hairstyle.

My personal favorite take on Electro’s design happened in 2008 with The Spectacular Spider-Man, starring Josh Keaton and developed by Greg Weisman (Young Justice) and Victor Cook (Darkwing Duck). It was, frankly, one of the best animated adaptations of a superhero I’ve seen. Here, Max Dillon is working in the lab of Dr. Curt Connors (the Lizard), as the doctor works to transfer genetic traits from one life form to another. One of his test animals gives Peter Parker his powers, and Max suffers a similar accident, gaining electrical powers he can’t control. Connors quickly develops a suit (which happens to be green) to contain Max’s incredible power. But eventually Max gets angry and starts tearing stuff up. This leads to fights with Spider-Man, who nicknames the guy “Lightning Butt” and “Electro.”

It’s a nice touch that Max’s outfit is not something he wears for fashion purposes but a practical thing he’s forced to rely on. What’s more, rather than wear a lightning mask, the cartoon makes the visual literal with a lightning aura revealed whenever he takes off his protective cowl. Talking to Greg Weisman about this, he told me, “My feeling was that Electro’s costume was a bit on the silly side in a modern context. And the Starfish mask (because as a kid that’s what it looked like to me more than lightning) was almost distracting. But if we had that lightning emanate off his head as part of his power, suddenly it seemed very contemporary and monsterish.”

In the current cartoon Ultimate Spider-Man, Electro is portrayed with the classic starfish mask and a take on the Ditko green jumpsuit. When he gets super-charged, however, he becomes a being of living lightning, similar to the Ultimate Marvel comic books version. This Electro is voiced by former Spider-Man voice actor Christopher Daniel Barnes.

There’s this play called Spider-Man: Turn Off the Dark. It is very much its own beast, very different from the atmosphere of the Spider-Man comics in a lot of respects. It is possible that on one occasion Superior Spider-Man writer Dan Slott and I re-enacted the play in a bar. You can’t prove that.

In any event, I figured we should look at the outfit that Electro wore in this theatrical version. This costume fits the atmosphere of the musical, I’ll concede that. At times, it had sparklers involved. I don’t care to see it elsewhere at all. Moving on.

In the past few years, the comics have tweaked Electro’s look again and it varies from artist to artist. Sometimes he has black gloves and trousers. Sometimes he has green trousers and lightning gloves again, but no gold trunks. One common factor is that he has ditched the mask and is now rocking a baldhead look with lightning burns across his face that echo his mask. It’s a similar idea to the live-action Daredevil movie where the assassin Bullseye had a target carved into his forehead rather than wearing a mask with the design painted on it (although why an assassin would put a target on his head is beyond me).

So why does Electro have scars now? Did he lean in way too close to a microwave after putting silverware in it, just to see what happened? According to writer Mark Waid, Electro is now middle aged so his body chemistry is altering and it’s made his abilities erratic. This and his efforts to become more formidable and in control of his powers result in the facial burns. Not a bad idea.

That wraps it up for now, people. Time will tell how Jamie Foxx’s Electro is handled on the big screen and whether we’ll truly dig seeing his look in action, or find ourselves thinking “this would be better if he wore a really absurd mask.” Send in suggestions for what we should cover next time in the column. Until then, this is Alan Kistler, Agent of S.T.Y.L.E., signing off!

Alan Sizzler Kistler (@SizzlerKistler) is an actor and writer. He is the author of Doctor Who: A History.