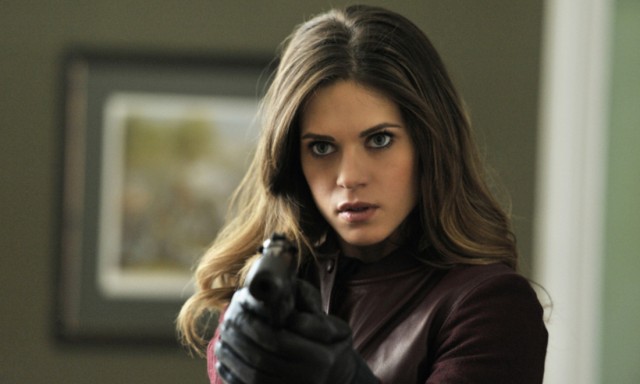 Agent Carter has just picked up Nikita, Kick-Ass, and How I Met Your Mother actress Lyndsy Fonseca!

An aspiring actress living in 1946 New York, Angie will befriend Peggy Carter (Hayley Atwell) as she herself seeks to find her place in the post-war world.

“‘Marvel’s Agent Carter’ opens up an exciting world of new characters for us,” said Jeph Loeb, Marvel’s Head of Television. “Lyndsy brings a warmth and humanity to Angie, who’ll be the friend Peggy needs if she’s to survive the dangers that lie ahead.”

“Marvel’s Agent Carter,” starring Captain America’s Hayley Atwell, follows the story of Peggy Carter. It’s 1946, and peace has dealt Peggy Carter a serious blow as she finds herself marginalized when the men return home from fighting abroad. Working for the covert SSR (Strategic Scientific Reserve), Peggy must balance doing administrative work and going on secret missions for Howard Stark all while trying to navigate life as a single woman in America, in the wake of losing the love of her life–Steve Rogers. Inspired by the feature films “Captain America: The First Avenger” and “Captain America: The Winter Soldier,” along with the short “Marvel One-Shot: Agent Carter.”

Here’s hoping Fonseca’s character has more in store for us than just acting. Considering her Nikita work, we’d love to see her fighting alongside Peggy in the field.