LOTR Ripoff, Age of The Hobbits, Claims Hobbits Are Real | The Mary Sue 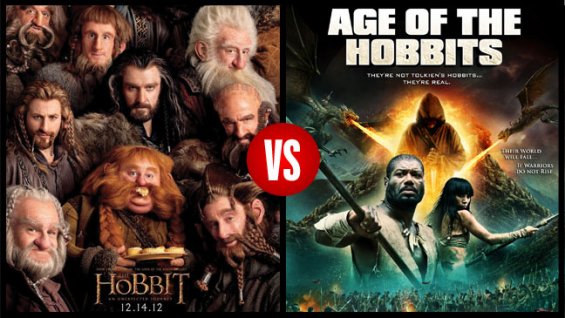 The Hollywood Reporter sites a lawsuit currently under way. “Sources tell The Hollywood Reporter that lawyers for Warner Bros. subsidiary New Line Cinema, which is producing the The Hobbit, and The Zaentz Co., which controls trademark rights to the book, have threatened Burbank-based The Asylum, arguing that its upcoming Age of the Hobbits violates the trademark in the protected phrase and threatening legal action if it doesn’t change the title.”

But The Asylum says they aren’t referring to the hobbits invented by J.R.R. Tolkien but rather an early hominid species.

“Age of the Hobbits is about the real-life human subspecies, Homo Floresiensis, discovered in 2003 in Indonesia which have been uniformly referred to as ‘Hobbits’ in the scientific community,” a representative for The Asylum told THR. “As such, the use of the term ‘Hobbits’ is protected under the legal doctrines of nominal and traditional fair use. Indeed, a simple Google search of Hobbits and archaeology reveals dozens of articles containing the term “Hobbit(s)” in the title.”

Age of the Hobbits is set for release on December 11, just three days before Jackson’s film, so it’s clear to most they are indeed trying to cash in on the notoriety that comes along with it even if they have a disclaimer on its packaging.

THR writes, “Asylum lawyers are vowing to fight any title change, but the company has backed down in a recent legal spat. As THR reported this summer, Universal sued Asylum over its Battleship clone American Battleships, arguing that the name and similar marketing materials would confuse consumers. Asylum changed the name to American Warships.”

What do you think? Should they be able to use the word “hobbits” in their film?