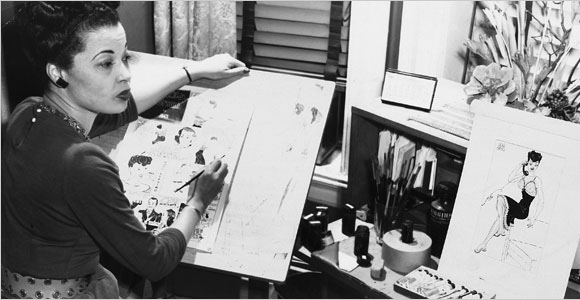 CNN Geek Out recently did an interview with Eaton discussing the Ormes Society, an organization created to support African-American women making comics while also promoting diversity in the industry. “I wanted to use the organization as a way to fend off creative isolation and to build a support network of like-minded individuals,” Eaton told them. “I had believed that I was alone for so long and these other women were sitting right under my nose. I was so pleased to find out that there were other black women out there creating. Still, I can understand the desire to let one’s work stand on its own, completely divorced from the creator. With comics, that can be achieved.”

According to CNN, “Members include webcomic creators Charlie Trotman (Templar, Arizona) and Carol Burrell (SPQR Blues), and comics illustrators Afua Richardson (Top Cow’s Genius) and Alitha Martinez, who began her career at Marvel and now publishes her own series, Yume and Ever.” Eaton found the members on message boards and did not assume or know their race.

Eaton, part of the industry herself, has created the webcomic Simulated Life and has been a comic fan since childhood. While the group does discuss more high-profile characters from time to time, they tend to focus on those who aren’t. “Characters like Tesana, the misfit in A Home for Mr. Easter, Sheriff Tommy Lindo in Welcome to Tranquility and Lee Wagstaff, a little girl growing up in the 1930s Deep South in [Jeremy] Love’s Bayou,” writes CNN.

Besides the characters themselves, Eaton is also concerned with the demographics who are currently reading comic books. “I find it so frustrating that I come from a family of readers and yet I am the only woman who reads comics,” she said. “I think the best way to attract black women as consumers is to eradicate the myth that comics are for men and solely involve superheroes.”

Eaton suggests recruiting more African-American authors and showcasing popular black female comic book characters in other media like films and television. “I wouldn’t be surprised if [The Walking Dead’s] Michonne inspires a few black women to leaf through a trade or two while browsing in Barnes & Noble.”

But it’s the organizations namesake that keeps Eaton inspired. She first discovered her work in 2007 thanks to comic book historian Tim Jackson. “Finding her work was like opening the door to a lost world,” she said. “An entire American subculture and been denigrated and misrepresented through mainstream comics for years. Ormes used comics to show African-Americans as they really were; as human beings. Her work should be collected and shelved next to peers such as (Will) Eisner.”

Eaton said that although she’s received a lot of encouragement and support from others in and out of the industry, she will continue her pledge and is hopeful a change will happen. “A strong writer is capable of handling intriguing characters of any background. It is simply a matter of finding writers with an interest in black female characters,” she said. “That said, I have definitely noticed a rise in ethnic and racial diversity where comic characters are concerned.”

Read more about Ormes in this NY Times piece and check out the Ormes Society at their official website.