Adventure Zone: Petals to the Metal Delivers Its Most Heartfelt Installment Yet, Complete With Car Chases, Sexy Plant Talk, and Bittersweet Romance 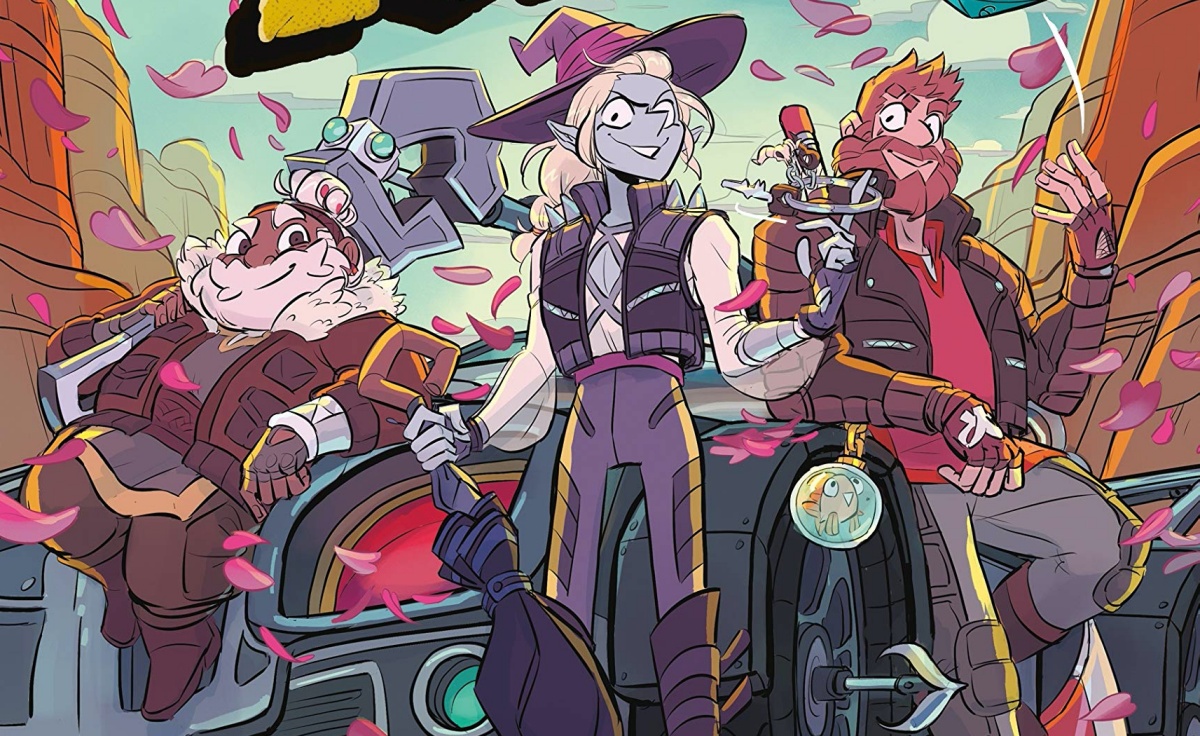 For the past three years, one of the things I’ve come to look forward to is the latest installment in The Adventure Zone graphic novel series from First Second. As someone who was not totally familiar with the Adventure Zone podcast when the graphic novel adaptation landed on my desk, finding them both at the same time has been a delightful gift.

It is clichéd to say that it has improved with every installment, but I can honestly say that Petals to the Metal combines the exceptional narrative of The McElroys storytelling and Carey Pietsch’s dynamic and vivid art.

Our boys have gone full-time at the Bureau of Balance, and their next assignment is a real thorny one: apprehending The Raven, a master thief who’s tapped into the power of a Grand Relic to ransack the city of Goldcliff. Local life-saver Lieutenant Hurley pulls them out of the woods, only to throw them headlong into the world of battle wagon racing, Goldcliff’s favorite high-stakes low-legality sport and The Raven’s chosen battlefield. Will the boys and Hurley be able to reclaim the Relic and pull The Raven back from the brink, or will they get lost in the weeds?

Based on the beloved blockbuster podcast where three brothers and their dad play a tabletop RPG in real time, The Adventure Zone: Petals to the Metal has it all: blossoming new friendships, pining for outlaw lovers, and a rollicking race you can root for!

As someone who is a total sucker for mythology, character growth, and ladies loving ladies, Petals evolves the stakes in a new and engaging way. Much like in the podcast itself, this arc marked an evolution in the storytelling of the series, and we talked to the Adventure Zone crew about how that came about.

“I reached a point while we were working on this book that mirrored where I was when we were doing the podcast,” Griffin McElroy said. “This was the part where we started to take some pretty big narrative, emotional swings.”

Travis McElroy stated that this is the first time he enjoyed playing Magnus because “the reason the whole ‘Magnus rushes into things’ started was because I didn’t want to play a fighter. I wanted to be a rogue, so I kind of wanted to die in battle to re-roll a character.” But as this story progressed, he began to think of him as a part of this team, and that made Travis start to consider the impact of his actions on the other characters.

As someone who waited until after reading this installment to listen to the podcast, I went into the reading experience knowing nothing and being truly surprised at how it managed to be so heartfelt. Writing adventure is hard, but managing to, at the same time, instill it with romance, especially one that features character’s we’ve just met, is difficult. Yet, as I turned each page, I found Pietsch’s art just added so much depth to each moment that it filled in all that space until I ate it all up like one of those surprise cakes on Twitter.

The relationship between Lt. Hurley and Raven/Sloane was not something I knew to expect, and it struck me as a sort of lesbian Batman/Catwoman story between this thief and officer of the law. I also loved Hurley’s design, with her broad muscles and sweet, yet strong physique. After She-Ra, this story gave me all the feels.

But to get to the metaphorical “meat and potatoes” of it all, what this story also does is make the relic hunting story more than just a typical MacGuffin heist. The stakes have been raised as we see how this power can corrupt anyone. The morality is no longer starkly good and bad; it is a spectrum of evil, which makes it more complicated and dangerous.

“I actually got more fired up, and my gears started to turn on what we could do to improve the following arcs in the same way we have improved the first three,” Griffin McElroy shared. “I’ve enjoyed doing the first three books, but after finishing this one, I’ve been thinking about it kind of nonstop—about what we can do to make special. So I’m not tired.”

And neither is Carey Pietsch, who has been given the Herculean task of bringing to life a piece of work that is so popular and so intricate, but surpassing expectation from time to time. There is a Fast & the Furious/Mad Max vibe to this story, which explains the tricked out car and leather jackets in the cover, and that meant car chases.

“I took a research trip to an old car museum,” Pietsch explained. “Putting that initial work in really gave me a better understanding,” as well as “reading and watching a lot of media that focused on car chases.”

Fast & the Furious was a big inspiration for this storyline, and if you know anything about that franchise, the thing that is most important to it (besides the fast cars and denial of gravity) is family.

“There is a lot of character drama wrapped in the way that they are fighting,” she continued. “The whole team is playing off of each other while they are in the middle of this high octane cartoon.”

Petals to the Metal is a very straightforward story, but by choosing to take some extra time to evolve the relationship between Hurley and Sloane/Raven—and allowing us, as the readers, to physically see the body language evolution and intimacy between our heroes—it sets the stage for an explosive magical conflict that’s been simmering.

I know that fans of the podcast will read this, and the books are bestsellers for a reason, but if you have been skeptical and unsure if this series was for you, Petals to the Metal is a perfect look at why it’s so popular.

The Adventure Zone: Petals to the Metal is out now.