But HOW did they revive it? Mouth to mouth? 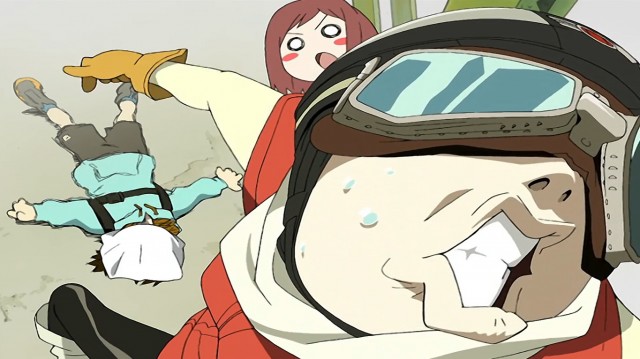 FLCL, a weird and wonderful anime examination of adolescence (plus robot battles), was short, sweet, and pretty much perfect—despite also being largely and deliberately nonsensical—in its original six-episode run back in 2000/2001. Now, Cartoon Network’s Adult Swim is bringing it back for not one but two additional seasons, and I have some very strong, conflicting emotions about it … kind of like adolescence.

If you didn’t catch FLCL the first time around, it’s about a boy named Naota, his older brother’s ex-girlfriend, and an alien woman who appears on a moped and beats him over the head with a bass—instrument, not fish. This sets in motion a chain of events involving robots springing from Naota’s head, a giant factory/clothing iron to smooth all the wrinkles in our brains (or something), photography, arson, baseball, and space pirates. Trust me, you’ll understand it quicker if you just watch.

But that’s all part of why I’m not sure how to feel about new episodes. FLCL was a pretty self-contained thing that came to a satisfying conclusion and really felt complete, and trying to recreate the perfect normalcy of its strangeness could easily run into problems. However, with creator Kazuya Tsurumaki returning to supervise director Katsuyuki Motohiro (Psycho-Pass), character designer Yoshiyuki Sadamoto (Neon Genesis Evangelion), and writer Hideto Iwai (Last Dinner) and Production I.G (Ghost in the Shell) handling the animation, I’m willing to keep an open mind.

Here’s a breakdown of where the story will go from the press release:

In the new season of FLCL, many years have passed since Naota and Haruhara Haruko shared their adventure together. Meanwhile, the war between the two entities known as Medical Mechanica and Fraternity rages across the galaxy. Enter Hidomi, a young teenaged girl who believes there is nothing amazing to expect from her average life, until one day when a new teacher named Haruko arrives at her school. Soon enough, Medical Mechanica is attacking her town and Hidomi discovers a secret within her that could save everyone, a secret that only Haruko can unlock.

But why did Haruko return to Earth?
What happened to her Rickenbacker 4001 she left with Naota?
And where did the human-type robot ‘Canti’ go?

All of these questions and more will be answered in the new season of the series, which is set to premiere in late 2017/early 2018 on Adult Swim.

It’s still early, but it sounds like another, slightly older coming-of-age tale with a girl in the protagonist spot to switch things up. Hopefully it manages to recapture the spirit of what made the original great but brings us a whole new set of oddball experiences.