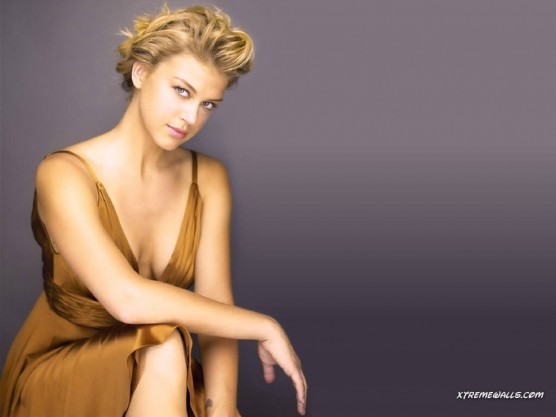 The news broke last night from The Hollywood Reporter: Adrianne Palicki will be playing Wonder Woman in the new David E. Kelley series on NBC.  Palicki’s longest running role to date has been that of Tyra Colette on Friday Night Lights, but we’re happy to report that… well, she might be one of us.

According to an ancient Friday Night Lights actor profile (too old to be dropping this kind of connection unless it were actually true), she “collects and reads comic books.”  She’s also done voice acting for Robot Chicken, including Robot Chickent: Star Wars Episode II.

We’ll admit that the first thing we noticed about her is that she’s not a brunette, but, to borrow a phrase from a different female superhero show, “we have the technology” to make that a nonissue.  According to Wikipedia, she ran track in high school, and Newsarama reports that she also played basketball.  She’s also nearly six feet tall, so, frankly, between the athleticism, the Amazonian height, and the fact that she’s a comic book fan to begin with, we’re more than willing to give the hair a pass.

As to whether David E. Kelley’s ideas for the series will meet with approval, that’s still inconclusive.  Bleeding Cool has recovered this screen test for the series of actress/model Tanit Pheonix reading parts of the script.

We’d really like to be able to have a firm opinion on this, but we’re unwilling to give up hope that the whole thing will work.  Can we please, please get some confirmation on whether or not this Wonder Woman will have superpowers, Mr Kelley?  NBC?  Anybody?