Adorable Junkyard Robots You Can Purchase For a Lot of Money 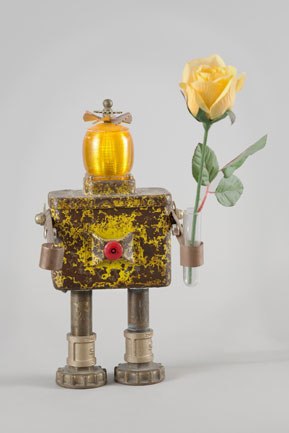 Even though you probably have pictures of loved ones and some action figures on your desk at work, that doesn’t mean the personalization of your work space is complete — it could probably use an adorable robot, made out of scavenged scrap parts, that is holding a flower. Sculptor, scavenger, builder Tal Avitzur put his keen eye for scavenging parts and his creativity for making adorable things to use, and created a bunch of very cute, intricate, impressive junkyard robots. Check them out below, but make sure you have a puppy nearby, because you’ll probably need to pet something to expel all the adorable you’ll be building up.

While looking for parts during a remodeling of his home, Avitzur began happening across interesting, sometimes vintage machine parts, from old vacuum cleaners, to kitchen appliances, to lab equipment. Instead of pass the parts up, he began collecting the pieces, and it became something of a hobby. He cites a youth filled with science fiction as his inspiration for turning the parts into the adorable junkyard robots. He brings the finds home, disassembles them if necessary, cleans them, then looks for personality hidden within each piece. Once that’s found, he finds other pieces that would complement the build, then performs his builder magic. Each sculpture is one-of-a-kind, so they’re on the expensive side, around $850 a pop, and they all have to be specially ordered from Avitzur.

The robots stand taller than one would expect — the smaller ones seem to be around 14 inches, while the larger ones seem to rise almost 30 inches tall — so they’d have to loom over your desk rather than share a space with that picture of your dog. They’re awesome, though. Check them out:

Avitzur’s adorable robots look like they could be inhabitants of a Geekosystem favorite, Machinarium.