Today, October 7th, marks the 2011 date of Ada Lovelace Day, an occasion of celebrating women role models in science, technology, engineering and mathematics; named after a lady known as the Right Honourable the Countess of Lovelace to the 19th century British peerage, but the Enchantress of Numbers to Charles Babbage, the man who invented the concept of a programmable computer. In a nutshell, Ada Lovelace was the daughter of estranged parents, estranged because her father was notable unstable poet and madman Lord Byron, and in an effort to keep her from ever developing her father’s literary-infused madness, her mother made sure Ada had the kind of tutors who have their own Wikipedia pages, reasoning that she’d math the poetry out of the girl.

And it worked: by the time of her death at thirty-six, Ada had become one of the only people to actually understand what Charles Babbage was getting at with his theoretical computers, to the point where she had actually written an algorithm for the putative analytical engine that would compute Bernoulli numbers.

Above is the Ada’s first appearance in Kate Beaton‘s (NYT Bestseller!) Hark! A Vagrant, and even though it is the obscurest of obscure references, “Sock It To ‘Em Ada” was one of the first categories I threw onto our onsite list. (It’s true, our categories have no function. Think of them like the alt-text on a webcomic.)

Finding Ada, the people behind Ada Lovelace Day, encourage everybody to use the day to help “people learn about the achievements of women in STEM, inspiring others and creating new role models for young and old alike,” and for people to share stories about any woman that has inspired them. And just in case you need some suggestions, we’re here to help.

But over all, XKCD wants to remind you that women scientists are not alone. 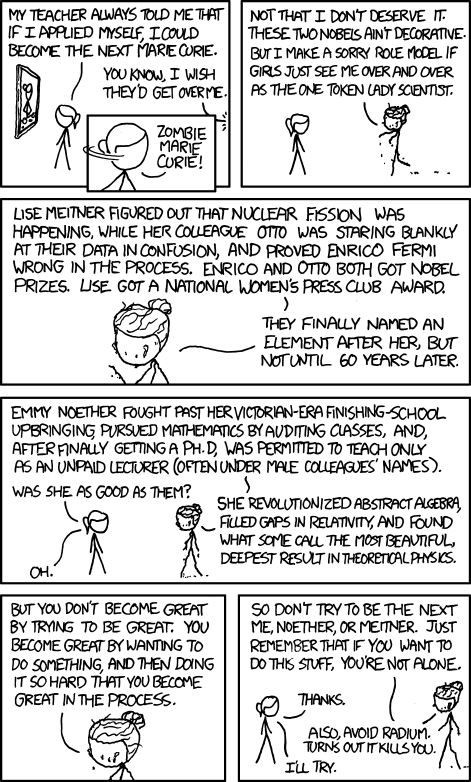