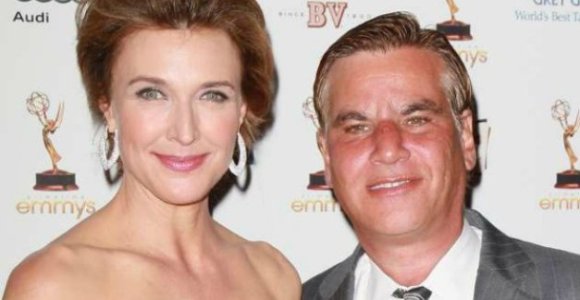 Aaron Sorkin did that to his face, guys. While writing. That is how intense he is — he breaks his freaking face. You might be wondering if this means that Aaron Sorkin actually walks and talks while he writes, but no. That is not the case. At least not this time. No, he was reading some of his own writing to himself in a mirror and then got too close. And like some scene out of Evil Dead 2, the reflection of Aaron Sorkin reached out of the mirror and punched the real Sorkin in the face. No, I’m kidding. But he did head-butt himself by accident. And then he went to the Emmys, where Getty Images got the picture from above (that is Brenda Strong to the left). Thank you, Getty Images. And thank you, Aaron Sorkin.

Quoth the scribe to the LA Times:

“I wish I could say I was in a bar fight, but I broke my nose while writing.”

Obviously, the dialogue he was writing was for his new show about the cable news world (which does not have an official title yet, but has been picked up for series by HBO), because seriously, anyone reading the stories in the news are bound to 1. become angry and/or 2. feel a strong desire to hit something. (Hi, Mediaite!) And Aaron Sorkin is an intense writer, so he probably feels these feelings twice as strong and with three times as many words. So this was bound to happen.

In fact, if I hadn’t heard about Aaron Sorkin breaking his own face on a mirror while reading new dialogue for his show out loud, I’d have to say I’ve lost all faith in his passion and my hopes for this new show. We wish you a speedy recovery, Mr. Sorkin. But next time you injure yourself after an explosion of creative/emotional intensity, try to at least win an Emmy for it, especially if it happens around Christmas. You totally made that work for Bradley Whitford in the second season of The West Wing.

(via AV Club, The Hollywood Reporter via Videogum)