If the summer heat has you longing for the autumn season, specifically the atmospheric trappings of supernatural October, then a quick escape to the world of ParaNorman should tide you over until the leaves turn (or, in this reviewer’s case, until the palm tress are no longer self-combusting). Full of traditional ghouls, and contemporary understanding, ParaNorman is a solidly packed animated adventure that calls to mind teen movies past. It’s got style, some neat bells and whistles, and a show of beautiful craftsmanship that nearly makes up for the pacing pitfalls.

Norman’s a likeable young boy, withdrawn and imaginative, sullen and stubborn as befits both age and situation. He’s got an inherited gift he doesn’t want; he can see, and freely communicate, with the dead. His discussions with unseen spirits make him the laughing stock of the town, but his powers come in handy when a long-dead witch’s curse unleashes the undead, and a fierce neon-lit hurricane, on blasé Blithe Hollow.

It’s clear that the filmmakers identify with their spiky-haired protagonist, perhaps seeing in his frustrating small-town life something of their own pasts as creative kids. As Norman skulks to school, where he is teased, bullied, and ignored, the hunch of his tiny, hoodie-clad shoulders telegraphs defeat. Norman is resigned to his fate, but lonely, and the film nicely sets up the intricacies of being caught in one’s own little world for too long.

In the grand tradition of other occult-tinged family fare, Paranorman delves into surprisingly dark – if not particularly deep – territory. On the trail of the truth about what happened in their town so long ago, Norman is treated to a number of visions that paint an upsetting, if not unrealistic picture, of the curse’s origin. It’s pleasing to see the film deal with the dark underlying material of a witch’s trial, and to do so directly. Perhaps the implied echoes of the film’s themes about self-isolation, mistrust of adults, and the power of fear to distort perception could have been less overwrought in their delivery. Yet, ParaNorman holds the line at the universal market rating without pulling its punches, and that deserves a lot of credit.

The real treat in ParaNorman is the clever, obsessive attention paid to detail. Each set is near to bursting with textures and small pieces that are as atmospheric as they are engaging. From Heidi Smith’s human character designs that recall classic movie monsters, to the flickering, B-movie film grain over the opening, great care has been taken to make Norman’s world as memorable as it is tactile. At the same time, the film has a deliberately handmade feel to it, an important choice in an era when even stop-motion animation can catch flack for looking too much like its CG competitor. Movement can be too perfect, too slick, and animation directors can lose the warmth of their medium to the ease offered by new technology. ParaNorman pulls off the delicate balance of using what’s available without sacrificing the evident hand of the artist. Like LAIKA’s previous feature, the well-received Coraline, this trip to the pre-teen dark side utilizes 3-D printing to achieve more subtle, smoother facial transitions than previously available to stop-motion productions. Never one to repeat themselves, however, LAIKA’s brought some new tricks to the table. Notable is the use of sculpted “blur” frames in scenes of fast motion (many, many examples can be found here), an optical illusion neatly lifted from Chuck Jones and taken to a logical extreme by LAIKA’s computer crew. In classic Looney Tunes cartoons, for example, the zipping, swift speed effect on say, Bugs Bunny, is achieved through a frame between poses that is a literal drawn blur traversing the screen. These bizarre frames, however, are not seen individually by the human eye, held at only 1/12th, many times 1/24th of a second. The idea to interpret this concept in 3 dimensions is a leap of brilliance. 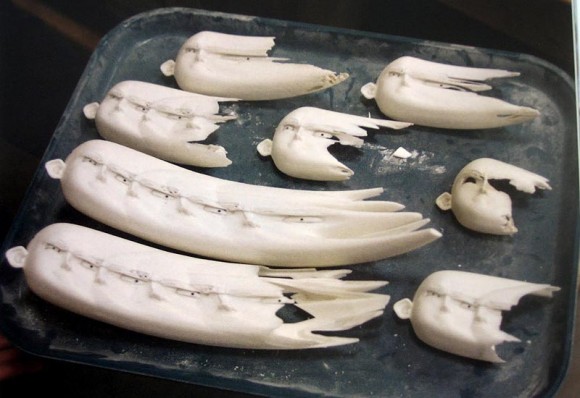 All this detail, like lovingly applied wood paneling on the family’s car, however, raises a question about ParaNorman, one that the references and bumpy plot pacing try to disregard. Supposedly, the film takes place in the modern era, as, at one point, Norman uses a cell phone as a flashlight to poke around his uncle’s spooky, ooky digs. He does lose it in a moment of fright, but no other characters seem to possess these magical devices save Norman’s parents, who use theirs once, to bother the kids as they escape from newly risen zombies. No one looks up the story of the witch’s curse on the Internet, except for resident nerdy girl Salma during a critical moment. In fact, from Norman’s school, to the town hall, almost no one seems to have heard of computers. The charm of a pre-cell world seems to be what the filmmakers are going for. If that’s the case, why not make it a period piece? Having the film actually set in an earlier decade would hardly affect the plot’s larger details, including when and how the witch is attempting to return each year. Rather than call attention to modern convenience by its conspicuous absence, it might be better chuck it out entirely.

At a trim hour-and-fifteen minutes, the film is swift, light in tone and light on its feet. The jokes and hammy character bits can be near-overwhelming, and often unnecessary, since it’s smart, smaller moments that make Paranorman such a surprising delight. Modern animation audiences, even purportedly child-heavy audiences, don’t need to be bombarded with worn humor to keep them focused. The same could be said of action, for once things get underway, they stay going at full tilt until the climax, with only a couple, necessary dips in the road. A single-line throwaway near the very end of the film had me raising my eyebrows in surprise more than any of the crawling undead and spectacular feats of witchery that occur.

While it is likely the filmmakers meant to draw parallels between Paranorman and 80s/90s teen supernatural adventure flicks like Hocus Pocus, the reliance on archetypes can be stale compared to the story’s more sensitive moments. Early on, the movie gets a lot right, especially in the awkward, endearing development of Norman’s friendship with a fellow social pariah; chubby, bubbly Neil. Norman is reluctant to emerge from his morbid-tinged solitude, which is equal parts ostracization and self-imposed survival tactic. But Neil is having none of it, proving loyal with the fervor of someone who knows all too well what being an outcast can feel like. A scene near the film’s start, where Neil drags Norman to his backyard to attempt communication with a deceased pet, is particularly touching. When compared to this gentle handling, the typecasting of roles like Norman’s blonde, shallow teenage sister, appear more flat than they would otherwise.

There is a fine line between archetype and stereotype. It speaks volumes that the cast of presumably archetypal characters also includes a sassy, jive-talking, overweight, African-American female traffic cop who is played entirely for laughs. It’s shorthand for a type we’ve seen before and should be past, and certainly one that desires far, far more thinking on the part of those in charge. This level of fallback rankles in a film that boasts such thoughtful visual touches. With so many innovations at play, it’s time to bring the ideas up to the same level. Paranorman is admirably dark, and lovingly rendered, proof of the capabilities at hand. I don’t doubt that going further is yet possible.

Zoe Chevat is a pop culture commentator on various websites, including The Mary Sue and Anime News Network. She holds an MFA in Film and Animation from CalArts, where she was part of the Experimental Animation program. She lives and works in Los Angeles as both a writer and animator, and, as a relocated East Coaster, still finds the first part of this sentence to be unnerving.