Marvel’s A-Force to Continue Beyond Secret Wars and All-New, All-Different Avengers to Debut This Fall! 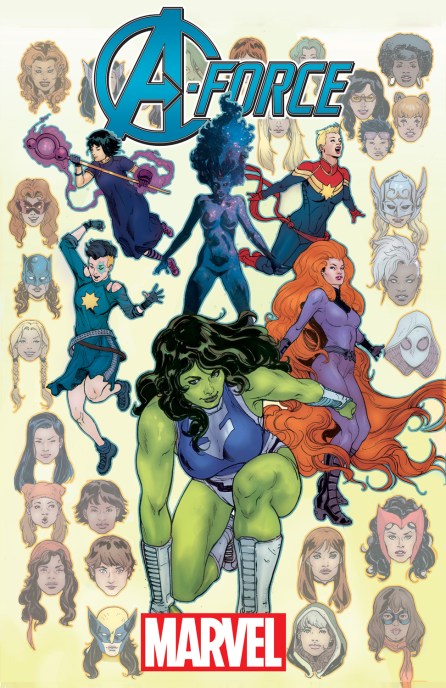 You knew we’d be all over Marvel’s A-Force, a comic created for the current Secret Wars summer event in which an all-female team of Avengers is Arcadia’s best defense in Battleworld. Issue #1 of the Secret Wars story arc of A-Force, written by Marguerite Bennett and G. Willow Wilson and drawn by Jorge Molina, started off amazingly, and we can’t wait to read Issue #2. Well, A-Force fans, there was some great news today! Marvel will be continuing A-Force after Secret Wars with a new #1 continuing the series in the Fall!

Wilson and Molina will continue on the title, which will start with an all-new Issue #1 this fall.

NOTE: There are spoilers below. You’ve been warned.

According to a press release from Marvel:

So who is the mysterious Singularity? Where is she from? And how will she pull our band of heroes together? “Readers first became acquainted with Singularity during our blockbuster summer event SECRET WARS,” says series editor Daniel Ketchum. “At the conclusion of SECRET WARS, Singularity will arrive in the new Marvel Universe. And when she discovers that its fate is hanging in the balance, she will summon A-Force to her side to battle a threat the likes of which they’ve never seen.”

With the world in danger, the call is made – A-FORCE ASSEMBLE! Marvel’s most powerful women are ready to take the world by storm and no one is more excited to present the new A-Force team than series writer G. Willow Wilson. “Given the tremendous fan response to the A-FORCE SECRET WARS series, I’m very excited to bring this wonderful cast of characters home to the new Marvel Universe. She-Hulk, Dazzler, Nico, Medusa and an exciting lineup of guest stars will take on a threat unlike anything they’ve ever faced before.”

If you haven’t yet gotten on the A-Force train, definitely check it out. Watching these female heroes in action – together – is truly an amazing experience. And you only have one issue to get through before Issue #2 comes out next week! The Secret Wars story arc continues for five issues through September, with the new Issue #1 happening after that. 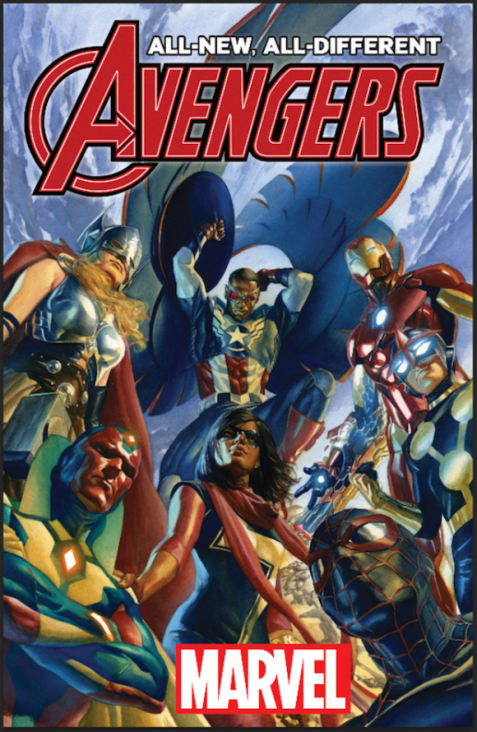 Meanwhile, in other Avengers news, October brings the debut of the All-New, All-Different Avengers (is that the title, though? For real? That’s not a title, that’s a marketing strategy. That’s like, if they would’ve called A-Force “All-Female, All-Ovaried Avengers.” But whatever.) in a new series set to drop in October! The new title, written by Mark Waid with art by Adam Kubert & Mahmud Asrar, finds Tony Stark leading an all-new group of Avengers including Captain America [Sam Wilson], Thor [Jane Foster], Vision, Miles Morales, a.k.a. Spider-Man, Nova, and Ms. Marvel! SO MUCH AWESOME ON ONE TEAM! And notice – only one white dude. This is what progress looks like!

Kicking off the new series, writer Mark Waid plans no training period and a baptismal by chaos and WAR! “As faithful NOVA readers will recognize, the main villain in our first story – Warbringer – has strong ties to Sam Alexander [a.k.a. Nova], but does Sam dare confess this to the team after the havoc Warbringer wreaks in New York City?​”

Waid also plans to place hurdle after hurdle in front of this new team including a challenge a majority of people have to deal with every day – financial responsibility. “One of the Avengers’ often-undiscussed ‘superpowers’ has always been Tony Stark’s boundless fortune. As readers of Brian Bendis’s upcoming INVINCIBLE IRON MAN will see, Tony can no longer be the team’s sole financial resource–meaning that our Avengers will have to operate a little more modestly and with limits to their resources, making their battles even more challenging.”

The Avengers assemble this fall for a team that will truly live up to the name the series title implicitly states that is all-new, all-different, and like no other Avengers team ever. “This team is a group of characters that you’ve never seen operate together before, no matter how long you may have been reading comics, and yet it’s also a team that upholds the Avengers’ traditions—there’s nobody among these characters that you look at and feel hasn’t earned their place on the team or in the spotlight, the way some past Avengers occasionally have,” says Marvel Executive Editor Tom Brevoort. “And it’s possibly the most real-world reflective Avengers team of all time, with only a single white male to be found amidst the membership rolls.”

Fall can’t get here soon enough! Keep it up Marvel – we love the look of the new Marvel U!