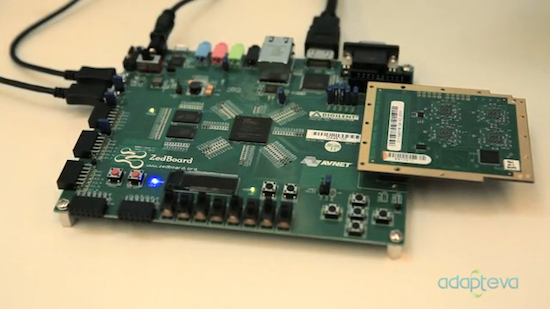 If you’re like me, you really want a Raspberry Pi because it’s a neat, cheap little gadget, but then never got one because you realized that its significantly low power means you can’t really use it for regular computing, and you aren’t skilled enough at coding and hardware building to do anything fun with it. A Kickstarter project, recently launched by semiconductor company Adapteva, aims to bring us a much stronger, 16-core, yet similarly tiny computer for only $99.

Adapteva feels that we’ve hit a plateau in terms of computing power, and if you’ve been following your daily email spam of Newegg newsletters for a while, you’ll notice that, yeah, the progress of computing power seems to be slowing down a bit. Adapteva feels the next step in impressive computing power growth lies with parallel computing, normally an expensive endeavor. However, with the recent trend of tiny, super cheap computers like the Raspberry Pi and the Gooseberry, Adapteva took to Kickstarter to hopefully launch a small, legitimately powerful, cheap computer for less than one hundred dollars.

Dubbed the Parallella, if the Kickstarter goal is met, the board will sport a dual-core ARM9 CPU, a 16 or 64-core accelerator, 1 GB of RAM, a 16 GB MicroSD card and two USB 2.0 slots, standard Gigabit Ethernet, an HDMI connection, as well as two general purpose expansion connectors. The board will ship with an ARM port of Ubuntu 11.04 — not shipping with 12.04 is unclear at the moment, but one might wonder if it has to do with attempting to port the contentious Unity interface. The board also ships with development tools, such as a C compiler, a multicore debugger, Eclipse IDE, an OpenCL dev kit and compiler, and some run time libraries. The little board only measures 3.4 inches by 2.1 inches.

…the Parallella computer should deliver up to 45 GHz of equivalent CPU performance on a board the size of a credit card while consuming only 5 Watts under typical work loads. Counting GHz, this is more horsepower than a high end server costing thousands of dollars and  consuming 400W.

Which, if they could pull off for only $99, would be pretty ridiculous.

At the time of this writing, the Kickstarter project only has a little over $60,000 pledged, with a goal of $750,000 and a stretch goal of three million bucks. For $99 bucks, you’ll get a board when it ships, which has a target date of May 2013, and for a pledge of $499, you’ll receive the board in February of 2013. As someone who really wants a super cheap computer to play with that can actually run things on it, I’m seriously hoping this project hits its goal.

Check it out in more detail over at Kickstarter, and check out a video below.