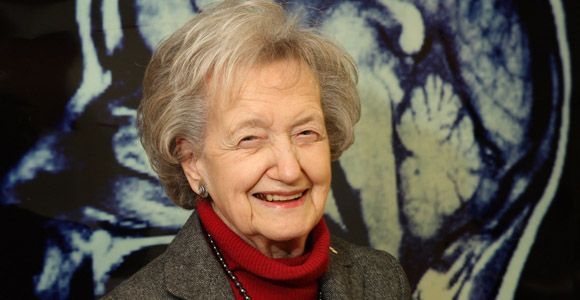 Dr. Brenda Milner got her Ph.D. in 1952 and has been a pioneer in the field of cognitive neuroscience ever since. She’s picked up a few awards in her years of study but just this week was presented the Pearl Meister Greengard Prize which goes to women with outstanding achievement in the field of biomedical research.

The Huffington Post writes, “Dr. Greengard cites Dr. Milner’s ground-breaking, long-term study of a patient — H.M. — who suffered from epilepsy and underwent radical brain surgery to try and control seizures. The surgery caused the patient to suffer from amnesia which led to a breakthrough in understanding how the brain works, including the role of the frontal lobes in processing memory and organizing information.”

She’s currently the Dorothy J. Killam Professor at McGill University’s Montreal Neurological Institute and professor in the department of neurology and neurosurgery at McGill University and has been awarded honorary degrees from more than 20 different universities.

Dr. Milner had this to say about her win, “I am absolutely delighted and amazed to receive this special award and so proud and honored to be representing women scientists in this context. I am very privileged for having been able to pursue my sense of curiosity within the culture of excellence at the Montreal Neurological Institute, as well as to train and encourage talented young students — driving forces throughout my career to which I attribute much of my success.”

Besides the honor, Dr. Milner was awarded $100,000, which she plans to give to the Brenda Milner Foundation she created from her life savings and other award prizes. According to Fox News, it “supports postdoctoral fellowships in cognitive neuroscience at the Montreal Neurological Institute. “Memory was not a fashionable topic when I began to work on it,” Dr. Milner told them. “And I worked on it because the patients had memory problems. And when the patients come to you and says they have trouble with your memory, you don’t say, ‘Oh I’m not interested in that, I’m working on something else.’ You say, ‘Well, do you really have a memory problem? Let’s see.’”