Nickelodeon To Start Airing Its ’90s Shows Again, For Real This Time 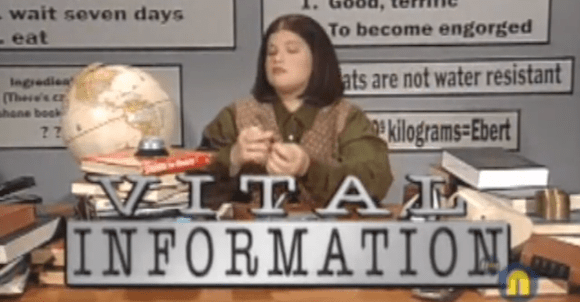 Just an introduction, before we blow your mind: a few weeks ago, a fake internal memo from Nickelodeon circulated on the internet, proclaiming that the kids television network had bowed to years of older fans clamoring for a way to watch it’s classic shows, and would be producing new episodes of Doug, Rugrats, The Angry Beavers, and more.

Except now it is almost true.

According to Entertainment Weekly, “starting this fall, TeenNick will dust off old faves like Rugrats, Kenan & Kel, Pete & Pete, The Amanda Bynes Show, All That and Clarissa and air them in a new midnight-to-2 a.m. programming block.”

The name of the block will be, naturally, The ’90s Are All That.

And it wouldn’t be a stretch to say that the internet’s response to the fake memo had something to do with it:

The tween cabler came up with the idea after seeing the huge interest in early Nickelodeon programming on social media sites. There are several Facebook pages — followed by millions of fans — that are devoted to Nickelodeon shows from the ’90s.

“At the time, we were completely devoted to that audience ages 9, 10, and 11,” Keith Dawkins, senior VP and general manager of TeenNick, tells EW. “It was ground-breaking and for the young viewers, a powerful and pivotal time in their lives. Those kids who are now 22, 23 and 24 want to bring that back.”

Here’s hoping that list of shows above gets a little bit bigger, maybe some You Can’t Do That on Television, Salute Your Shorts or Aaahh!!! Real Monsters. I don’t mind if they don’t put the Angry Beavers or Hey! Arnold back up, as long as they keep letting us stream it instantly from Netflix.

(via The Daily What.)