Department of Energy Study Says U.S. Could Have 80% Renewable Power by 2050 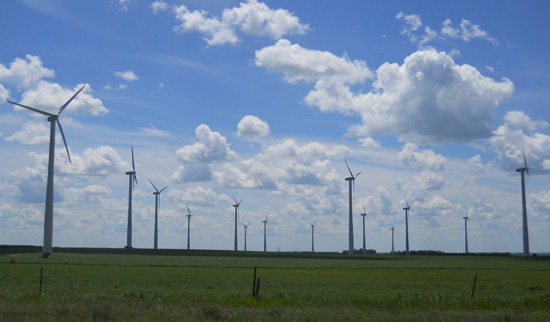 A new study published by the National Renewable Energy Laboratory (NREL) has some good news: Renewable power could contribute up to 80% of the nation’s electricity needs by 2050 using existing, commercially available technology. Though the transition won’t necessarily be easy, the report is a strong endorsement of expanding renewable power.

The report, which bills itself as “the most comprehensive analysis of high-penetration renewable electricity of the continental United States to date,” found that with continued investment in renewable power and a smarter power grid, the U.S. could generate most of its power from renewable sources by 2050. The report is highly detailed, but NREL has also provided a number of useful visualizations to outline their projected growth in renewable power.

NREL’s findings seem to completely obliterate the tired arguments that renewable power is too impractical, or that intermittent sources — those being sources like wind and solar that don’t generate power all the time — aren’t reliable enough for large-scale power production.

Interestingly, the report also looks at a mixed range of renewable energy sources as opposed to a single area of investment. Though wind power will make up the bulk of renewable power generation, biomass, solar, geothermal, and hydroelectric have a place along with fossil and nuclear power. NREL also posits that while some of the largest areas of power generation will be localized, like East Coast offshore windfarms, the entire country can contribute. From the report’s website:

The abundance and diversity of U.S. renewable energy resources can support multiple combinations of renewable technologies that result in deep reductions in electric sector greenhouse gas emissions and water use.

Of course, just because the potential power is there does not mean it could easily harnessed. One of the reports key findings is that a more flexible and responsive energy grid will be necessary to get the power that is generated into homes, and do so in the best way possible. So not only do we need to capture energy, we need a better way to move it around.

Though the report says that such a future is feasible, it does project some pretty breathtaking expansion. In their coverage, IEEE Spectrum outlines the challenges ahead for wind power alone:

The 80 percent scenario requires 439 gigawatts of installed wind capacity in 2050, only about 50 GW of which is currently installed. Can the United States build more than 10 GW per year—or between 2500 and 3000 turbines—for almost 40 years? Or the extensive transmission requirements to move that power? Or the 150 GW of photovoltaic panels needed?

The answer to those questions will largely depend on the willingness of industry, the federal government, local officials, and individual citizens to make the expansion of renewable power a priority. That’s a lot of ducks to get into a row.

However, the NREL report says that a future with cleaner power is at least possible. And keep in mind that continued investment will likely help bring down costs and increase efficiency, hopefully making the journey toward 80% renewable power easier with every step. The trick will be finding the initiative to work toward achieving that end goal.