The grave-robber was caught after trying to sell human remains at a flea market, which was probably like, the fourth or fifth creepiest thing on sale at that flea market. 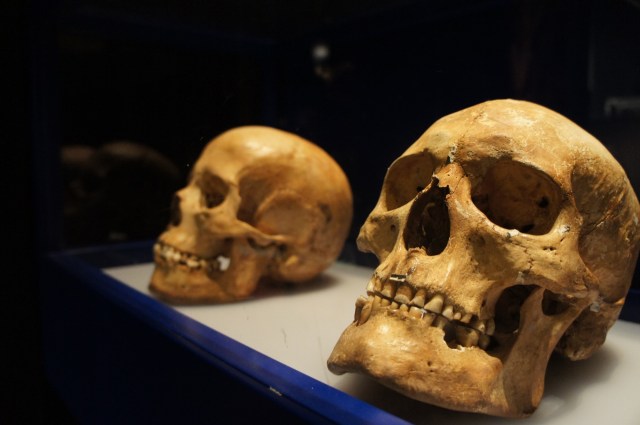 Austrian police raided a man’s home to find a personal museum consisting of 56 skulls and dozens of other bones. He was charged for raiding a church cemetery, but I’m sure he has a good explanation for this. Maybe he was trying to put on 56 technically-accurate performances of Hamlet?

The 47-year-old man, whose name has not been released by authorities, was found to have 56 skulls and 55 other bones, mostly thighs, stashed in his apartment in Oberwart, Burgenland, Austria. Police were first alerted to the macabre collection when he tried to sell three of the skulls and two thigh bones at a flea market.

According to police, the skull-hoarder stole the bones from the cemetery at the Maria Weinberg Parish Church. About a month before his arrest, he told the sexton there that he was on an official mission to collect the bones for a museum, and apparently the sexton didn’t argue or ask for proof. The man then proceeded to clear out a tomb from the 17th century and took the bones home with him.

The bone collector has been charged with disturbing the peace of the dead, and the bones have been confiscated by police, no doubt rendering the local evidence locker even creepier than usual. The parish priest plans to deliver a blessing to the disturbed remains and rebury them in their proper resting place. Hopefully, that’s a chore that will make him more careful about who he lets awlk in and take bones out of tombs in the future.

Exactly what the collector planned to do with the bones and why he decided to sell some of them is unclear, but the man reportedly told police he only wanted to save the bones from decay. That’s as good a reason as any, we guess. I mean, do we really need to know in detail what he was going to do with 56 skulls? We do not. Meanwhile, a police spokesman told Reuters that he’d never seen such a case in his 37 years on the force, which is exactly what the police say in every single horror and disaster movie ever. SyFy network executives, I hope you’re paying attention here, because let’s face it — the SyFy original feature Skull-nado basically writes itself.