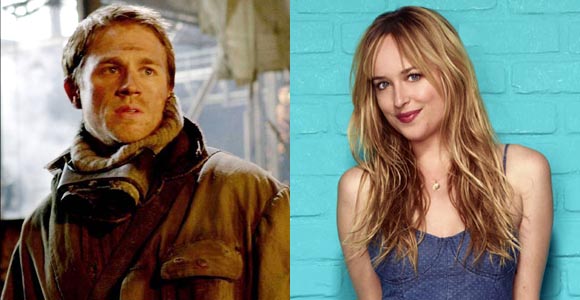 The long wait is over, Universal/Focus Features now has its leads for their Fifty Shades of Grey adaptation – Charlie Hunnam and Dakota Johnson.

Back in June, director Sam Taylor-Johnson was chosen to bring the first book of E.L. James‘ Fifty Shades of Grey trilogy to life on the big screen but many were still wondering who would land the coveted (?) lead roles. Johnson’s confirmation came first yesterday. According to the press release:

Ms. Johnson’s first notable screen role was in the multi-Academy Award-winning 2010 feature The Social Network, on which Mr. De Luca and Mr. Brunetti were producers.  Her subsequent movies include the upcoming feature Need for Speed, 21 Jump Street, and Universal Pictures’ The Five-Year Engagement.  She also starred as Kate in the Fox Network comedy series Ben and Kate, which aired during the 2012-2013 season.  Ms. Johnson is currently shooting the feature film Cymbeline.

Then Pacific Rim/Sons of Anarchy star Hunnam was said to be playing billionaire Christian Grey. James announced both via her Twitter account. She also wrote, To all the supporters, lovers and haters – thank you so much for the passion that you have for this project. You all rock. All of you.”

I haven’t read the book so I don’t have an opinion on the casting. What do you think, fans?

[UPDATE] Apparently some fans really don’t like the casting. There’s a petition to cast Matt Bomer and Alexis Bledel instead.