Fifty Shades of Grey and the Twilight Pro-fic Phenomenon 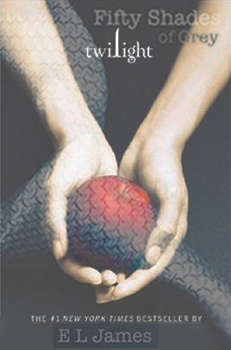 Let’s get this out of the way up-front: changing the names, context, and setting to make your fanfic into something original, then publishing it, is 100% legal. Dear Author, which is conducting a sadly accusatory series on fanfic due to the success of Fifty Shades, has a current post on whether fictional characters are copyrightable; but its framework sidesteps the whole point of transferring fanfic to pro-fic, which is that when it’s done successfully, characters are unrecognizable and distinct from their literary predecessors. There are many famous instances of people having done this, and innumerably more instances of people having based their characters on pre-existing characters, though the works aren’t always labeled fanfic. Publishing fanfic as original fiction has been an acknowledged fan-practice for decades, though little-discussed outside of fandom or acknowledged within the publishing world.

But we’re not just talking coincidental one-offs in which a few Twilight fans filed off the serial numbers and published their fics on the downlow. No, we’re talking dozens of converted fics. We’re talking a steady and systematic pool of writers within the Twilight fandom that have gotten so good at churning out easily-convertible fanfiction that no less than three separate e-book publishers have been created by fans within the fandom specifically for the purpose of publishing these works of Twilight fanfic. One of these, Omnific Publishing, bills itself as “Romance Without Rules.” This tag is slightly misleading, because there are definitely rules to this sort of game–just maybe not ones you’ll find in the hallowed halls of traditional publishing. For one thing, the best fics-turned-originals don’t just do a find-and-replace; they provide new aspects of characterization and really do attempt to turn the universes and settings of the works of fiction into something new. For another, fandom authors get writing advice via feedback from fans and fan-editors called beta-readers. The best betas will help you make your original work even better–and most often, they’ll do it for free, out of love for your work, something you couldn’t guarantee with a professional editor, no matter how skilled.

After all, if you’re a fan looking for a repeat of the the emotional thrill ride you got from Bella and Edward’s journey to love, what better place to get it than from a huge group of other Twilight fans who want the exact same thing? And if you’re an aspiring author looking to build a fanbase, where better to go than a fandom that has thousands of voracious romance fans ready to provide you with encouragement, support, feedback, editors, fan-run publishing houses, and even a built-in fanbase ready to fork over a few bucks in exchange for all the delight you’ve provided them? Fandom’s ‘in-house’ presses remove the gatekeepers of publishing houses, provide you the means of getting your work out there, and send it directly to the audience for your work. And it’s a huge audience.

It’s a win-win. Such a win, in fact, that many authors have been coming to the Twilight fandom specifically to launch their careers by “workshopping” their writing within the Twilight fandom. This trend, in turn, furthers the Twilight fandom’s isolation from other fandoms, and creates an exclusive fannish experience that can leave those of us on the outside shaking our heads. But pro-fic isn’t exclusive to Twilight by any means, and as Cyndy Aleo points out in DA’s fanfiction round table, “the Twilight community…has done a lot of great things most people aren’t aware of. There are regular fundraisers, which have benefited everything from charities like Alex’s Lemonade Stand to those impacted by natural disasters like Hurricane Katrina and the tsunami in Japan last year. I want people to know that for most of us it’s a fun hobby, for many it’s a way to trial and error our writing, and that we are the same as any online community out there.”

Even so, a number of things about the Twilight phenomenon seem to be confounding the publishing world:

Where does all this leave us? Fans are extremely divided as to whether publishing fanfic as original fic is a natural way to capitalize on a well-deserved fan following, or whether it’s a betrayal of the principles of free exchange that keeps fandom healthy and independent. It’s probably somewhere in the middle. Lots of fanfic authors have converted their fandom audience into a wider audience for their original writing. And even if they didn’t profit directly from a single fic with the names and settings changed, they still profited immensely from fandom experience. Fandom gave them writing workshops, networking skills, critiquing experience, and maybe even professional connections. All of that is a form of profit. And then there is actual published fanfiction, such as movie adaptations, branch-off comic universes, and franchise tie-ins. The truth is that the line between fanfiction and commercial fiction has been blurry for centuries, and neither original fiction nor fanfiction are in any danger of vanishing as a result of the overlap.

I’m ecstatic to see fandom owning up to its activities with pride and taking ownership of its own spaces, using them to grow and empower its own communities. Fifty Shades and the other pro-fics show off fandom’s best assets: engaged, passionate communities, made up primarily of women who have claimed the digital age for their own, and who are taking skills gained within fandom and using them to build their careers. Everyone wins. And if the success of Fifty Shades is any indication, the trend is only going to continue.

So what happens when female fan communities apply these skills to creating their own films, their own webcasts, their own serial programming, their own albums? Will fan communities have enough energy to sustain those types of projects, the way they have already sustained fan-run publishing houses, massive charities, non-profits, and conventions?

All signs point to yes. And the success of Twilight fandom at bringing the realm of publishing directly into fan space proves that the possibilities are endless.