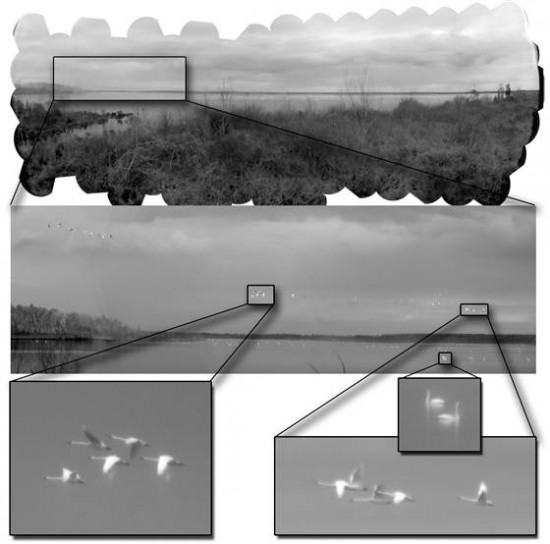 Someday, people will look back at all the CSI “Enhance!” jokes and never get them. The picture above was taken by AWARE-2, a 50-gigapixel camera system built by a team led by David Brady at Duke’s Pratt School of Engineering. As you can see, it has pretty insane enhance capabilities, even though it hasn’t reached its 50-gigapixel theoretical limit, so given enough time and funding, we could catch a killer by enhancing a photo of a license plate.

So far, enormously detailed photos have only been created by having one camera take hundreds of shots and then digitally combining them. This is usually only used when taking pictures of things that don’t move much, like the Milky Way. To take pictures of a person murdering another person reflected on a screwdriver head of a license plate of a cab, you’ll need a camera that does things differently.

AWARE-2 mimics the compound eye of a fly, which is probably why it looks like that. A single image enters the central lens which refracts it onto 98 different image sensors, creating 98 different images of the one image. These images are then assembled by a central processor to produce an incredibly detailed final picture.

So far, the team has only built a prototype (with which they took the picture) that uses only half the microcameras and first generation lenses designed for the system. The real quality comes from the objective lens, and that is currently at 10 gigapixels.

Then why call it a 50-gigapixel camera? Because Brady has dreams, you silly. 50 gigapixels is the upper limit of lens-manufacturing technology, and also the resolution limit of the atmosphere. Any higher and you’ll be taking pictures of air. I would imagine that would get in the way of Horatio Caine’s investigations.