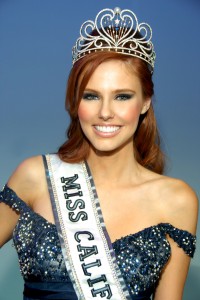 The blogosphere let out a collective water-spit when the new Miss USA, Alyssa Campanella called herself… a science geek. This, this, is death of geek as we know it! Because girls only say they’re geeks to get attention, especially, especially if they’re pretty.

I knew Geek Culture had taken over, but I had no idea that it had gotten so bad.

Maybe she doesn’t want geek cred, but she can-haz it if she wants, and she’s not the only one. Beautiful genuine geeks and serious science sirens not only exist, you can follow the jump for five more Miss USA contestants from the past two years, alone who’ve got some serious intellectual cred.

Even Cathy Lynn Grossman admits “There are more beautiful Darwin buffs than I first counted,” noting that there were actually five contestants in this year’s competition who were in favor of teaching evolution in schools (small victories, people, small victories). And just for reference, the brainy broads noted above didn’t even take that long to find. Granted, it would have been easier if Miss USA saw fit to write contestant bios with, *gasp*, words and not just a giant picture. (NBC and Trump, I’m glaring at you.)

So the next time the “she’s too pretty to be a geek” argument erupts, you should probably just let it lie. Nobody suggested that the Rock was co-opting geek culture for admitting that he loves D&D.