It's the 40th Anniversary of the Sports Bra! | The Mary Sue

It’s the 40th Anniversary of the Sports Bra! What’s the Next Innovation Women Need From Their Sportswear? 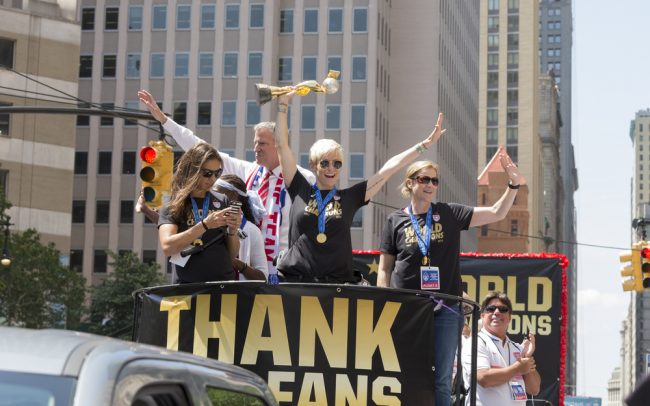 NPR recently published a piece for the 40th anniversary of the modern sports bra, a clever piece of sportswear innovation produced by Hinda Miller and Lisa Lindahl, which made it way more comfortable for women with breasts to participate in sports and up their exercise game. While it’s a seemingly small thing, and while government interventions like Title IX make far more difference in women’s athletics, it was undoubtedly a game-changer. At least, I definitely appreciate the difference when I’m running.

Thinking about the effects of this invention, I got to thinking: what else do we need from women’s athletic wear?

Of course, there have been a number of innovations in women’s sportswear since the sports bra. Sports bras themselves are now available in plus sizes (you know, for the women who arguably need them the most?) at many outlets, though certainly not enough of them. Athletic hijabs, which have been around for a while now, are finally getting big-name promotion from brands like Nike. Leggings are less see-through. At the Rio Olympics, the South Korean team even wore jackets meant to protect them from mosquito bites (and therefore Zika).

These things may seem small, but they lower the barrier for women’s participation in sports, and they make it less uncomfortable and more enjoyable for us to exercise – particularly when we want to exercise in public. The sports bra is also a great example of how some necessary innovations will only get made when women are involved in the process, and can speak to their own needs and discomforts.

Thinking about what a difference a sports bra makes, I was curious what other innovations we might be missing. For example, how can athletic wear better serve trans women? I know from my own friend group that it can often be damn-near impossible for trans women to find a women’s swimsuit that fits them. Or how could sportswear better serve religiously observant women, or women with disabilities? How can small clothing changes make it a little bit easier for women in rural areas, or women without access to athletic facilities, to exercise safely and comfortably?

Clothes obviously aren’t the end-all or be-all, but they’re a start – and they’re a way to address the ways that athletic wear is often made, first and foremost, with men in mind, and the ways that women’s athletic gear is often designed to fit a narrow, prescriptive body type.

What do you, personally, most need from your sportswear that you’re not getting? Let’s invent!

(Via NPR; image via Shutterstock)