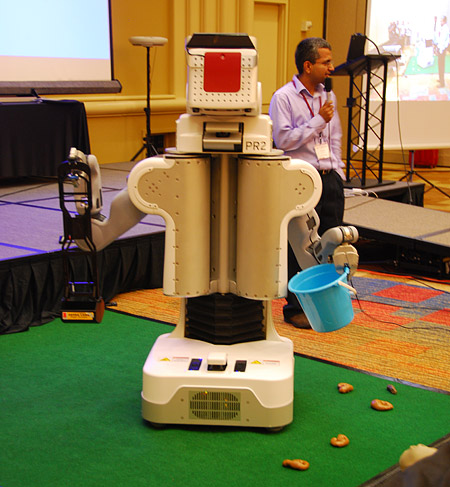 Ben Cohen and his posse at the GRASP Lab at the University of Pennsylvania have been working on a revolutionary project in robotics. They took a $400,000 PR2 robot, which has been used for such extravagent and sophisticated tasks such as making breakfast and cookies, and programmed it to pick up POOP. You’re probably wondering why that’s in all caps. Well, it’s because POOPs (Potentially Offensive Objects for Pickup) are not necessarily poop, but poop is always a POOP. Logic!

Using its POOP SCOOP (Perception Of Offensive Products and Sensorized Control Of Object Pickup) protocol the PR2 can scoop POOP and poop with unmatched skill. The bot uses its color cameras to identify POOP, then uses haptics to make sure that the POOP has been effectively scooped. If not, it’ll give it another go. So far, the PR2 can scoop 95% percent of POOPs on the first try. Granted, no one will actually use a PR2 to scoop POOP, and this is probably just a silly gimmick, but how can you not love something with POOP and POOP SCOOP acronyms that good.

Relevant to your fecal interests