Artificial Meat Made From Human Poop | The Mary Sue

Artificial Meat Made From Human Poop 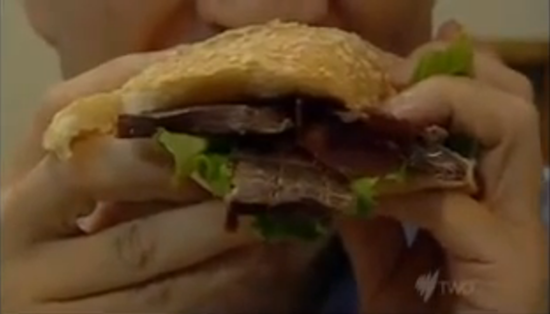 Japanese researcher Mitsyuki Ikeda has accomplished what we’ve all dreamed of doing: He has extracted protein from human fecal matter and turned it into edible, artificial meat. Yep, that burger pictured above is a human poopburger. A noble intention, Ikeda went down this road in order to be resourceful by recycling poop, which in theory, would actually help create food for the less fortunate — although one may say anyone who has to eat a poopburger is pretty unfortunate.

Currently, the poopburgers are quite expensive, costing around ten to twenty times the price of regular meat, because each burger has to factor in the price of Ikeda’s research. As delectable as “poopburger” sounds, Ikeda calls the poop extract “sewage mud,” which only sounds slightly better. Head on past the break to see a short video segment featuring Ikeda and his poopburger.