Reply All: NYU Students Able to Email 40,000 Classmates at Once 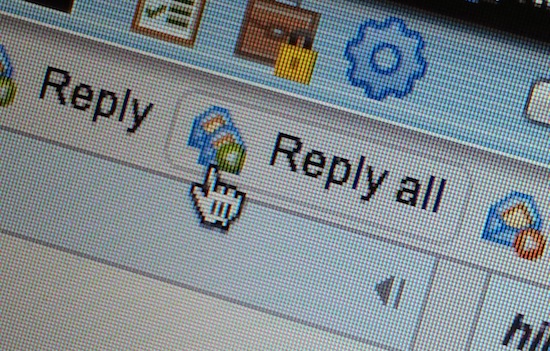 We nominate Reply All for the worst email feature, and we can think of about 40,000 college students who probably agree right now. Due to the fact that a schoolwide email was accidentally sent using the wrong listserv options, students at New York University were able to Reply All to 40,000 of their classmates at once. It went about as well as anyone would have expected.

The whole situation, deemed “Reply-Allcalypse” by NYU Local, started with an email sent from the school’s Bursar about student tax forms. When sophomore Max Wiseltier tried to forward the message to his mother, he accidentally hit Reply All, and his message of “do you want me to do this?” went straight to the inbox of 39,979 students.

Shortly after students received Wiseltier’s email, and his immediate apology after realizing what he had done, they came to the conclusion that they too could Reply All and send whatever they wanted to nearly 40,000 people at once. One popular option was a photo of actor Nicholas Cage. One student asked of his classmates, “Would you rather fight 100 duck sized horses, or 1 horse sized duck?” That’s an obvious answer. Fight the tiny horses. A giant duck would be terrifying.

Some students hit Reply All to tell everyone else to stop hitting Reply All, which is sort of a self-fulfilling prophecy of terrible email etiquette.

The real perpetrator of the Reply-Allcalypse was David Vogelsand of the NYU Student Resource Center. Instead of using Email Direct to send the Bursar’s email, he used Lyris which allows recipients to respond to the sender and to everyone else who received the message. Max Wiseltier was just the patient zero in this particular email epidemic.