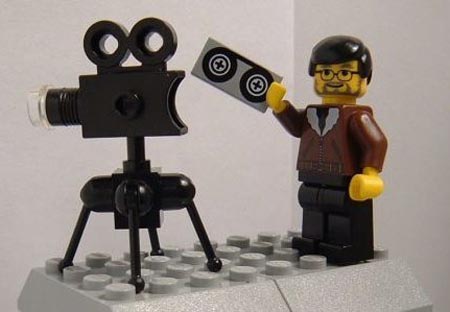 We live in an age where toys are movies and movies are toys and both toys and movies are video games but I’m not sure I’m sufficiently prepared to see the LEGO brand on film. But see it we will and it will be the relaunched 21 Jump Street directors who will bring the minifigs to life. No, this set did not come with directions.

Phil Lord and Chris Miller, directors of the Jonah Hill/Channing Tatum version of 21 Jump Street have been tasked to build a LEGO film from scratch. The duo had a decent hit on their hands with that movie but made their directorial debut with Cloudy With A Chance Of Meatballs.

The duo spoke with Empire Magazine recently and thankfully, they’re not blind to the fact that they are creating something viewers already have a deep attachment to.

“Oh God, I know. All we do is violate people’s childhoods – we’ve made a career out of it,” said Lord. “The thing that inspired us was the brick films that everybody makes online, just people in their basement using Lego to make crude stop motion clips, Star Wars and all that stuff. Our big idea was, ‘What if we gave millions of dollars to one of those people and let them make something?’ And so that’s kind of what we’re writing through.”

Miller said they’re actually attempting to solicit help from the LEGO community for the film. “It’s all because so much about this film is building things with people on the internet and we want as much of their influence on the movie as possible,” he said.

I think it’s a great idea. We’ve certainly posted several fantastic fan videos. For instance, The Dark Knight Rises trailer done in stop-motion, which the directors said they would have loved to utilize for their film but that it just isn’t feasible. Miller said:

It’s going to end up being mostly CGI due to the fact that it would cost a billion dollars to make that with stop motion. The number of Lego bricks we’d need, and the amount of time required is… crazy. There’s a scene with a pirate ship on a Lego ocean, and the whole ocean is animated into Hokusai waves, all in bricks, and just doing one of those shots would take somebody a year and a million dollars worth of bricks. So for the purposes of economy, and for the movie to not come out in 2035, we’re going to do it mostly in CG, but it’ll all look as photo-real as if it was made in stop motion with actual Lego bricks.

And for those of you who prefer your minifigs not to have a voice of their own, sorry, you’re out of luck.

“We’re hiring really amazing voice talent for the movie that’ll hopefully make it all work,” said Miller. “You’ll still need to follow a specific character, so hopefully the diversity of the voice talent will make up for the fact that it’s no going to be always the voice in your head, you know?”

So, are you excited about this movie or do you place it in the Battleship category?

(via Empire, image via)