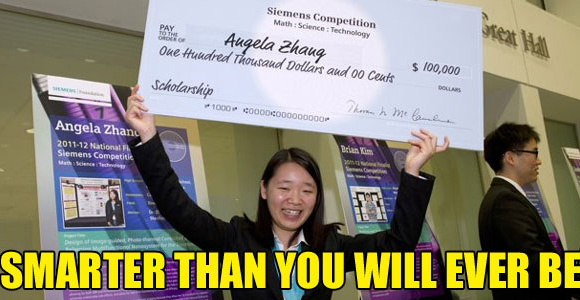 God! I really hate it when teenagers make me look lazy. Seventeen-year-old Angela Zhang has just won herself $100,000 in a high school science competition. What did she win for? Oh, you know, nothing big. Just a possible cure for cancer.

Zhang took home the Grand Prize in the Individual category of the Siemens Competition in Math, Science & Technology for her project “Design of Image-guided, Photo-thermal Controlled Drug Releasing Multifunctional Nanosystem for the Treatment of Cancer Stem Cells.”

Cancer stem cells (CSCs) are responsible for initiating and driving tumor growth yet are often resistant to current cancer therapies. In her research, Angela Zhang aimed to design a CSC-targeted, gold and iron oxide-based nanoparticle with a potential to eradicate these cells through a controlled delivery of the drug salinomycin to the site of the tumor. The multifunctional nanoparticle combines therapy and imaging into a single platform, with the gold and iron-oxide components allowing for both MRI and Photoacoustic imaging. This nanosystem could potentially help overcome cancer resistance, minimize undesirable side effects, and allow for real-time monitoring of treatment efficacy.

The teen is a senior at Monta Vista High School in Cupertino, California. To which I say, how is she still in high school??

To use a bit more simplified language, listen to one of the judges. “Angela created a nanoparticle that is like a Swiss army knife of cancer treatment,” said Tejal Desai, a bioengineer at the University of California, San Francisco. “She showed great creativity and initiative in designing a nanoparticle system that can be triggered to release drugs at the site of the tumor while also allowing for noninvasive imaging.” It’s basically personalized cancer medicine.

“It is a remarkable day for American innovation when our high school students do science research at this level,” said Jeniffer Harper-Taylor, president of the Siemens Foundation. “I hope other students will follow their example and embrace STEM subjects with such vigor. These young innovators are poised to drive the next generation of advances in science and technology.”

According to MSNBC, “Another $100,000 team grand prize was shared by Ziyuan Liu and Cassee Cain, seniors at Oak Ridge High School in Oak Ridge, Tenn., who hacked an Xbox 360 Kinect sensor to analyze the walking patterns of people wearing prosthetics.” More teenagers making me look bad for just playing video games with mine.

Zhang began her work on this project in 2009 (you know, when she was 15, no big deal) and spent an estimated 1,000 hours on her research. She’s planning on majoring in chemical or biomedical engineering or physics and would like to someday become a research professor.

I see a Big Bang Theory cameo in her future.