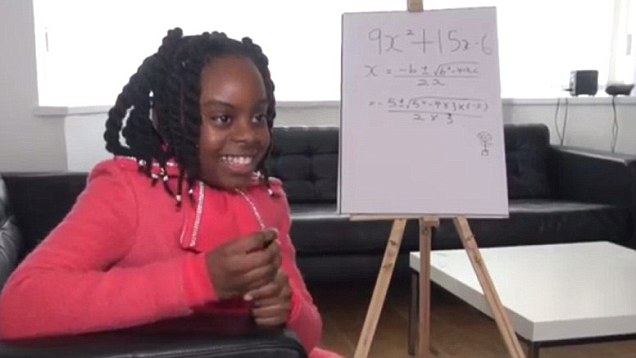 Esther Okade might be ten years younger than normal university students, but she’s easily ten years cooler. Even Tony Stark didn’t graduate MIT until he was in his late teens.

After successfully enrolling at the UK’s Open University, Walsall’s Okade has become one of the world’s youngest college students. She enrolled three weeks ago and has already received a perfect score on her first test, which she says was “easy.” I have a feeling not everyone might agree with that assessment – except her six-year-old brother, Isaiah, who is already taking university qualification exams himself. What magic DNA?

In addition to math, Okade also loves Frozen and playing with dolls, but attending university so young was entirely her idea. Her mother said that “from the age of seven Esther has wanted to go to university, but I was afraid it was too soon.” She finally gave in to her daughter when Okade hit double-digits. Apparently, Okade wants to run her own bank one day, and I would happily invest my money there, ma’am.

Okade previously made the BBC back in 2010, when she was only six years old, for receiving a C grade in her maths GCSE, a test normally taken by 14 to 16-year-olds in England. Okade took the test at Ounsdale High School in Wombourne, Wolverhampton, which are apparently all actual, real place names. At the time, Okade’s father (“the happiest dad in the world”) said that they noticed her “knack for numbers” at age three, and that her mother has been teaching her algebra and quadratic equations.

When I was six years old I was really into Charlotte’s Web, so, you know. There’s that.