10 Best Non-Human Females (And Their Capacity To Love)

This list of the best non-human females (and their capacity to love) has been quite a tedious task. The term “non-human female” is quite broad, and I bet a lot of you are asking yourself where the female aliens are on this list. Why not call them the best female robots? The answer is not that simple. The Mary Sue staff and myself agreed to establish a rudimentary basis for this list: the non-human females can not have reproductive abilities (so that pretty much cancels out a majority of our favorite martian ladies).

Which is to say, these female characters have gender, but no sex. That is, sex as a noun, not a verb. Their gender has been pressed upon them by their creator or the viewer regardless of the fact that they are completely asexual beings and, in fact, don’t reproduce (though it hasn’t stopped us from giving them genders and love interests). Which allows us to take a very interesting look at what characteristics, over the years, we’ve felt would identify a robot as female, and what roles we thought those “female” robots were suitable for.

The non-human females that made this list all have the makings of female humans. Some of the robots/super computers throughout geekdom, if female, are usually characterized by a high pitched feminine voice, a red bow or maybe some lipstick painted on their robotic lips. Or, my favorite, the attention-grabbing breast plates. Some of the characters exude all the qualities of a human female albeit the fact that their womanly parts are functionless. Although non-human, most of the ladies on this list have had interactions with their male counterparts, more specifically in the love department.

That’s when I ran into another conundrum: so many of the non-human ladies I was eager to mention have all, in some way or another, been involved in a mutual relationship with a man, whether it being their creator, friend or foe. Therefore, the ongoing discussion on non-human females and their ability to love does come into question once again. Enjoy, as some of the ladies mentioned may surprise you.

[Editor’s Note: Yes, we know, GLADoS and Sung Li/Girl One. Or, for that matter, Platinum of the Metal Men. The list goes on and on, and so the definition of “best” in this list is highly subjective.] 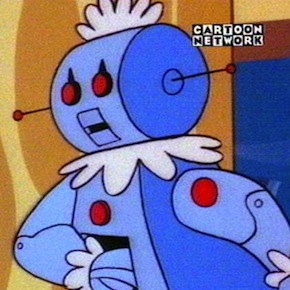 Rosie the Robot Maid did absolutely everything for the Jetson family. Seriously, did Jane do anything besides press a button to make breakfast, then wipe the sweat from her forehead in exhaustion? Since that was too much for her to handle Rosie was purchased by the Jetson family from the U-Rent A Maid service. She soon became the backbone of the family, with her ho-hum attitude and sarcastic retorts — “What was that, Rosie?” “Oh, nothing, Mr. J.” The character was actually based on the titular maid of the 1960s show Hazel, and if you’ve ever seen the show the resemblance is quite apparent. Rosie finds herself in a bit of a love dilemma in the episode “Wedding Bells for Rosie” when she is morally forced to marry Mac, another robot, in order for him not to be destroyed; Rosie reluctantly goes wedding dress shopping for the special occasion. But she does eventually truly fall for him when Mac attempts to commit robotic suicide and agrees to marry him in earnest, right before they find out that Mac has his BeBop permit (this is one you have to watch for yourself). 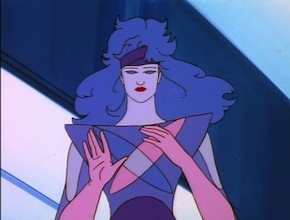 Synergy (Jem and the Holograms)

Jem and the Holograms wouldn’t be anything without their beloved Synergy. Yes, she is a super computer with advanced audio and visual capabilities, but she was primarily created by Jerrica and Kimber’s father, Emmett Benton, to be the girls’ surrogate mother (being designed as a facsimile of her likeness). Some fathers remarry, but Emmett wanted his daughters to have an evil stepmother-free life once he passed away. Synergy not only provides the girls with awesome clothes and the persona of money-making frontwoman Jem, but she pretty much can do anything Jerrica/Jem asks her to do at the touch of an earring. Including, but not limited to, turning Rio into a holographic monster or making a dragon appear to scare off the Misfits… or gangbangers. Occasionally, Synergy even comes out of her computer system prison and talks to the girls when they are facing hardships and need some motherly guidance. 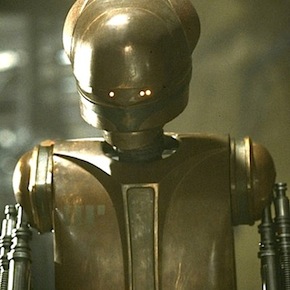 Yes, the droid best known for the line, “You’re a feisty little one, but you’ll soon learn some respect,” is female! Voice aside and no obvious breast plate adorning this droid, EV-9D9 is a sadistic sister doing it for herself. As the head of Jabba’s droid labor pool, EV-9D9 came from Cloud City after escaping the termination of all EV-series models. While in Cloud City she was known to torture other droids and gave herself a third eye that could “see” the pain droids went through during their anguish. She was soon ousted for her ways (including the near total destruction of all 12-series traffic control droids) and in her quick escape from Cloud City she temporarily damaged the generators that held the city afloat and set a ship on auto pilot as a distraction. EV-9D9 soon found solace at Jabba’s palace where she was able to dismember and torture droids at her leisure. It wasn’t until her employer’s untimely death that she was tracked down by 12-4C-41 (a.k.a Wuntoo Forcee Forwun): a traffic control droid from the 12-series of Cloud City. When he caught her he removed all of her limbs and allowed her tortured prisoners to dismantle her, but not before removing her third eye as he wanted to deny her that satisfaction. As far as any love interests, well, in EV’s case, her helper/torturer assistant 8D8 loathed her, which in her case means love, right?

Roll has managed to really be the only female robot in the Mega Man universe (not including the later addition of Splash Woman in Mega Man 9) that has experienced much redesign and has made a lasting impression on Mega Man fans, whether it be through the games or the animated series. Roll appears in numerous Mega Man games in younger and older incarnations. Dr. Light initially created Roll to be the housekeeper for the lab. Roll, through the years, has gone through a number of different weaponry and attacks; most memorable being the Ruby-Spears animated series Roll whose arm transformed into different household appliances. Since we seem to have a female-non-human-robot-love theme going on in this list Roll and Mega Man have a history together. Originally “siblings,” according to their creator Dr. Light, Roll and Mega Man have since been featured in some games as a couple. 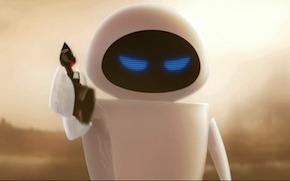 She may not have a bow in her hair, but EVE surely is one robot you don’t want to mess with. With her sleek design comparable to the iPod (of which she was partially inspired by, while her eyes were meant to resemble a Lite-Brite), the only characteristics that make her female to our eyes is her girlish laughter and the cosmic dance of love she and WALL-E partake in during the film, and the peck on the robotic cheek she gives him. If it wasn’t for WALL-E falling in love with her and acting all nervous in front of EVE, then we wouldn’t have even known just how girly she really was (because not even Pixar has the balls to put anything other than 100% heretosexual robots in a family film, even if robots can’t have sex). Not to mention this hippy robot chick is one for saving the planet from pollution, or “going green” as us humans put it. She’s the perfect package!

Next >>> Beast Wars, the Avengers, Transformers, and Metropolis