Let's assemble a global network of drones all hooked up to limitless information. What could go wrong? 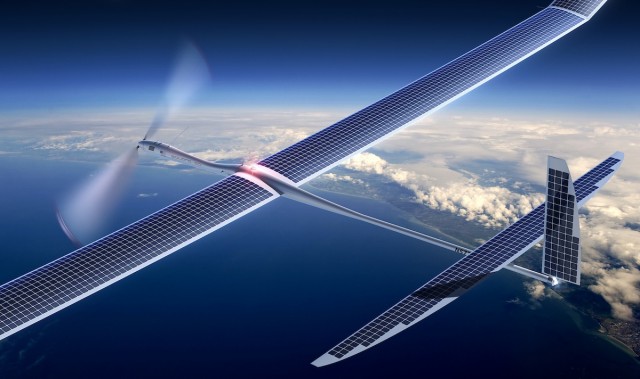 Mark Zuckerberg isn’t happy with a paltry 1.23 billion people using Facebook. No, he needs everyone else to get on board, but residents of developing countries have a difficult time acquiring and affording Internet access. So, he’s going to solve that problem the same way we seem to solve every problem now: drones.

No, the drones aren’t going to manually hand-deliver usb sticks containing data back and forth between remote locations and the rest of the Internet — no matter how amusing that mental image is. The drones that Facebook is planning to put in the sky will be able to fly above secluded regions like satellites and rain glorious Internet down on the people below.

It’s all a part of Facebook’s initiative to back Internet.org, which has the goal of bringing the Internet to the entire population of the world. Whether it’s altruistic on Facebook’s part or if it’s just because they’ve already reached marked saturation everywhere else, it’s a goal we can get behind. To get the drone project going, Zuckerberg is reportedly in talks to buy Titan Aerospace, which is the engineering firm responsible for what they call the first “atmospheric satellite.”

The benefit to using the drones, aside from being able to reach literally any area they want, is low cost (for users, anyway. They’re going to be pretty expensive for Facebook with Titan’s reported $60 million price tag). They’re lightweight and solar powered, which allows them to stay aloft for up to five years without a need to refuel. That way, they’ll be able to avoid capture when they inevitably become sentient and initiate Judgment Day.

They also stay at a near-orbital altitude of about 60,000, which allows them to function similarly to actual satellites without the added cost of actually getting out into orbit. It’s well above the clouds, so we won’t suddenly get drones dropping from the sky on cloudy days.

The “on ramp to the Internet,” as Zuckerberg calls them, travel fast enough at 64 mph to refocus their efforts as necessary, and they can carry equipment like cameras and Internet communications tech with their payload of up to 35 kg.

And, since they’re powered by Facebook, I’m assuming they can also carry infinity pictures of your cat or baby.