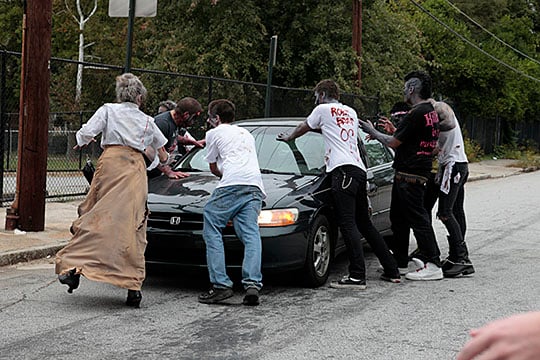 It’s a classic case of police profiling, or DWD.  Driving while dead.

Well, actually it’s not, but if you are on your way to a zombie event, and you get in a car crash, you are going to confuse (and scare) the heck out of your paramedics.  This is exactly what happened to five people in Portland, Oregon this Friday.

Sgt. Greg Stewart said people who witnessed the crash initially thought the victims’ injuries were much more serious, because of the zombie costumes.

“We’re glad that everyone is alive, despite being ‘undead’,”

The car full of zombie-dressed partygoers was apparently swerving through eastbound lanes of traffic at about 9:30 at night.  It then rolled over, coming to rest upside down.  Police are investigating whether there may have been more than 5 people in the car, with some fleeing the scene on foot.

This may or may not become a larger issue for Portland, depending on whether they were fast zombies, or slow zombies.

The KGW.com article does not mention whether alcohol was involved, but uh… we can make a good guess.