Zoe Saldana Does Sci-Fi Because It Has Stronger Female Characters

Your move, other genres. 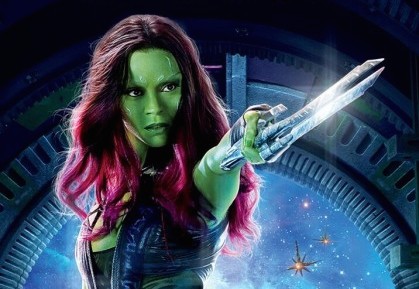 Around here, we all love sci-fi, but the outside world is still a place where people wonder, “Why would an actor do a lot of sci-fi?” So, Badass Digest asked Zoe Saldana exactly that question, and her answer was everything we ever could’ve wanted.

Sci-fi isn’t the only thing she’s done, but Saldana’s past and future work on Avatar and its sequels, Star Trek, and now as Gamora in Guardians of the Galaxy cement her as a part of the genre. Why does she seem to lean towards these movies? She answered:

I like being in space because there are better parts for women in space. I don’t have to subject myself to just being the love interest or playing a character that doesn’t feel relevant to the story or playing a woman that doesn’t feel like an actual depiction of a real woman. When I read films in space and I’m working with these kinds of filmmakers there’s a neutral sense to the way they develop characters. It makes me feel very significant, very relevant and very excited.

It’s sad that we have to go to all the way to space to find good depictions of strong women, but I agree with Saldana’s logic in a big way. Genre movies, sci-fi included, have a tendency to push boundaries and do new things, and they also have a plot outside of, “Person ‘x’ falls in love with person ‘y’ for unrealistically superficial reason. Hilarity/drama ensues.” That allows the characters to have goals and purpose outside of being a love interest for someone else, and even when characters in those kinds of movies have those things, the male character gets the focus 99% of the time.

So keep doing what you’re doing, Saldana, and we’ll keep loving it. Then, maybe some day we can live in a world where no one even thinks to question why a woman likes doing sci-fi movies.

(via Blastr, image via Marvel)