I wonder if they tried to get Andy Serkis. 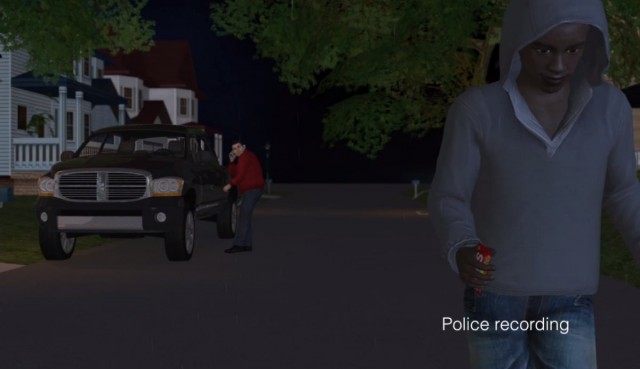 We generally leave things like the George Zimmerman trial to our friends at Mediaite, but part of the trial caught our attention this morning. The judge heard arguments about whether or not a motion-captured computer animation video produced by a defense witness should be allowed as evidence.

The video was produced by defense witness Daniel Schumaker who presented the video to the judge along with statements about how he created the video. He said he used people in motion-capture suits to reenact the events of Trayvon Martin’s death at the crime scene.

Schumaker took data from police reports and photos, witness depositions, as well as coroner reports and photos to piece together the video showing the defense’s version of the events. The timeline for the video came from a 911 call a neighbor made to report the killing.

The problem with the video, according to lawyers for the prosecution, is that it’s not an accurate depiction of the events. There were no witnesses that saw the whole situation, only a few that saw or overheard parts of the confrontation between Martin and Zimmerman that ended in Martin’s death.

The motion to keep the video out of evidence was filed by Assistant State Attorney Richard Mantei. Mantei claims the video fails to “represent a complete or accurate record of the evidence.” He points out that the lighting of the video is inaccurate to the real event, and says it deliberately leaves out the murder weapon. Mantei also points out that the video relies heavily on Zimmerman’s version of events.

A decision about whether the video would be allowed as evidence was put on hold to focus on a 911 call in which screams could be heard during the confrontation between Zimmerman and Martin. The judge is expected to rule on the video later this afternoon. We suspect it won’t be made available to the public until a decision is made. We’ll update should it become available.

Update: The judge has ruled that the animation will not be allowed as evidence. The Orlando Sentinel has footage from the hearing that includes clips of the animation: