Zapping Fruits and Vegetables With Electricity Could Kill Bacteria Instantly 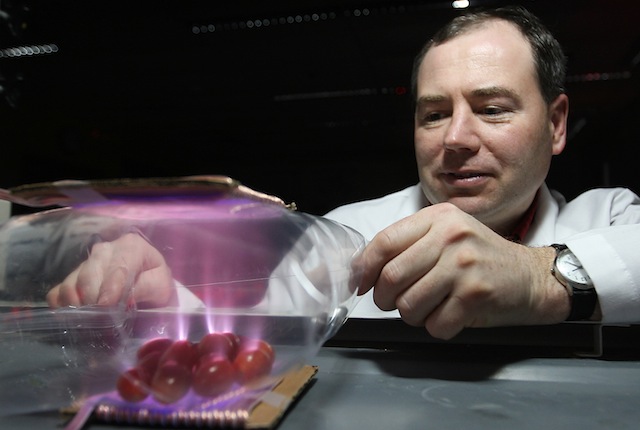 A Purdue University study may one day make washing fruits and vegetables after you take them out of the plastic bag a thing of the past. According to research conducted by food science professor Kevin Keener, using a short sharp shock can turn the gasses inside of packaged fruits and vegetables into a plasma that can kill microbes like e. coli and salmonella in just seconds, making them safe and ready to eat right out of the bag.

By blasting the bag your grapes come in — which acts as an electrical insulator — with electricity, the research team can produce molecules like ozone and hydrogen peroxide, which kill bacteria present on food before reverting back to non-harmful molecules after a day or so. This atmospheric cold plasma treatment, which Keener details below, can kill not only bacteria, but also viruses and mold spores that might be present on the food after it’s already in the package, so you don’t have to worry about anyone touching it with their filthy hands until you do. And while it’s brutal on microbes, the treatment is pretty gentle on food, leaving the quality of produce unchanged.

Tell you what — let’s just let Keener explain it. The man knows what he’s doing.