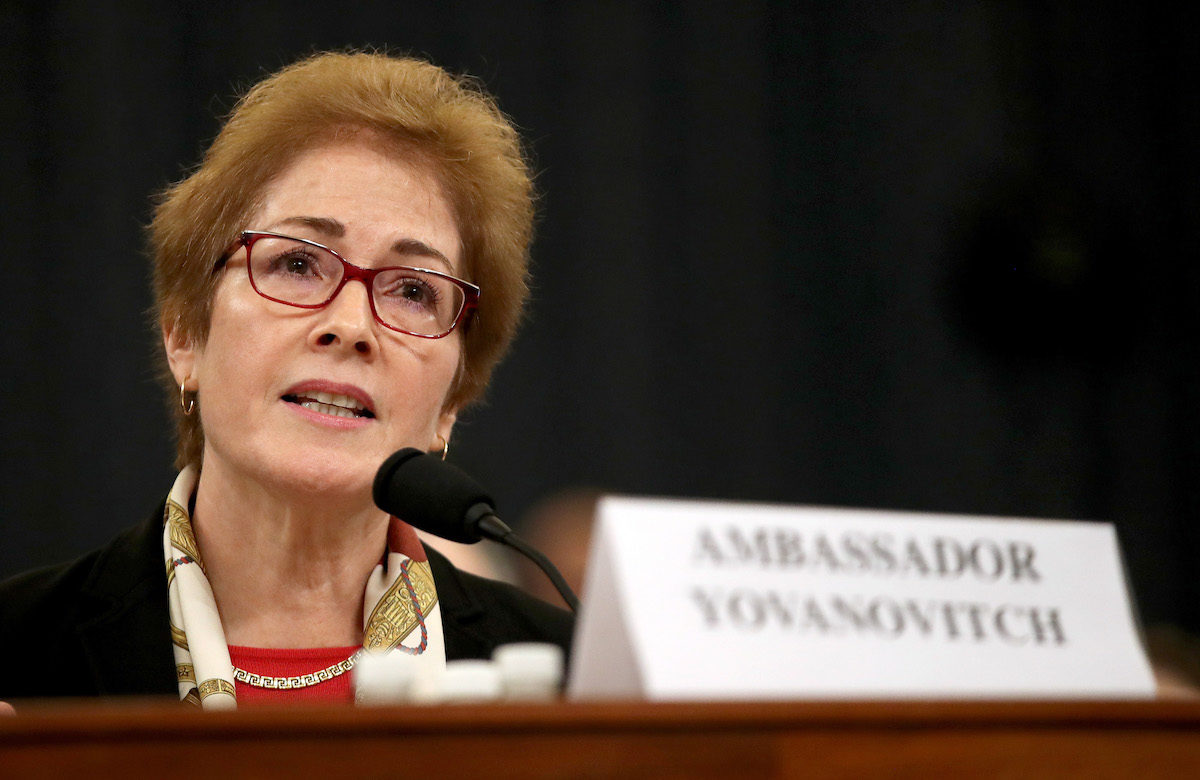 Public impeachment hearings are continuing today with former U.S. Ambassador to Ukraine Marie Yovanovitch. Yovanovitch was the first State Department representative to give her closed-door deposition to Congress last month and while the public wasn’t able to watch that hearing, her written statement was powerful and incredibly damning for Donald Trump. Watching her read her opening statement today was even more so.

“Mr. Giuliani should’ve known.” Amb. Yovanovitch, and also all of us. #ImpeachmentHearings pic.twitter.com/ZPVvlL9vZM

Which is likely why Trump is spending the hearing tweeting insults about Yovanovitch.

Everywhere Marie Yovanovitch went turned bad. She started off in Somalia, how did that go? Then fast forward to Ukraine, where the new Ukrainian President spoke unfavorably about her in my second phone call with him. It is a U.S. President’s absolute right to appoint ambassadors.

After Trump tweeted that, Committee Chairman Adam Schiff actually interrupted the Democrats’ official counsel’s questioning to address that tweet in real-time and ask Yovanovitch to respond to it.

To the accusation that everywhere she went, things “turned bad,” she simply said, “I don’t think I have such powers.” She also defended her service, which has been under both Republican and Democratic presidents, saying “I and others have made things better” in the places she served.

But this isn’t really about her response to the attack; it’s that the attack is happening in the first place. It’s meant, as Schiff says, to be intimidating, both to Yovanovitch and to others who might come forward to testify. (Yovanovitch, ever the diplomat, won’t agree to presume Trump’s intentions behind the tweet but agrees that “the effect is intimidating.”)

It is, plain and simple, witness tampering.

Witness intimidation is a crime. pic.twitter.com/d7Ave23Dat

It’s also not the first time Trump has weaponized his Twitter account against Yovanovitch. She says she was removed from her post earlier this year with very little explanation. She said she was told that though she had “done nothing wrong,” Trump had lost confidence in her abilities to perform her duties.

In that statement last month, she said she was “incredulous that the U.S. government chose to remove an Ambassador based, as best as I can tell, on unfounded and false claims by people with clearly questionable motives.”

As she lays it out, the smear campaign against her was led by Ukraine’s former top prosecutor Yuriy Lutsenko because she saw his office as being filled with corruption. It was aided by Rudy Giuliani because she raised concerns about the Giuliani-led “shadow diplomacy” we’ve heard so much about.

Crucial point from Marie Yovanovitch: “Shady actors the world over have learned how little it takes to remove a U.S. ambassador who does not give them what they want.”

Trump, it appears, listened to Giuliani and Lutsenko’s attacks on Yovanovitch and not only discussed her performance on private phone calls (like the infamous one with Ukrainian President Zelensky where he called her “bad news”) but also tweeted about her. As an effect, the State Department refused to back her up because, as she understood it, “The president might issue a tweet contradicting it or something to that effect.”

The counsel questioning her was incredulous:

Let me see if I get this right. You were one of the most senior diplomats in the State Department. You’ve been there for 33 years. You won numerous awards. You’ve been appointed as an ambassador three times by both Republican and Democratic presidents. And the State Department would not offer a statement in support of you against false allegations because the were concerned about a tweet from the President of the United States?

She confirms that that’s exactly what appeared to have happened.

Marie Yuvanovitch is a career foreign service officer. She has served Republican and Democratic presidents. Her service has been honorable and nonpartisan. These are the people Trump is pushing out in favor of unqualified lackeys and dangerous sycophants.

Yovanovitch’s testimony today was so powerful that even Fox News hosts were moved by it.

FOX NEWS’ CHRIS WALLACE: “If you are not moved by the testimony of Marie Yovanovitch today, you don’t have a pulse.” pic.twitter.com/KKDbeGngX8

They’re also not so jazzed about Trump’s witness intimidation.

Wow. Fox News’ Bret Baier says that Trump’s tweets attacking Yovanovitch could be construed as witness intimidation and hence “adding essentially an article of impeachment in real time as this hearing is going on.” pic.twitter.com/7IiDQ1xriP

We’ll likely be back with more updates later today, but you can watch live here: