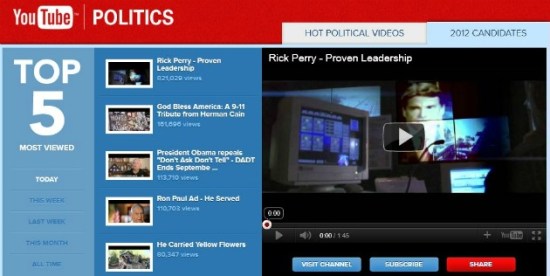 Revving up for the 2012 Presidential campaign, YouTube has introduced an official channel that will be devoted to politics. That doesn’t just mean that it’ll be a collection of promotional sound bites from politicians interspersed with ads, the channel is also intended to include things like parodies and other things that are related to politics, but not necessarily politically charged.

In addition to providing video, as YouTube tends to do, the channel will also provide some neat, up-to-date statistics about the YouTube numbers of each candidate in the 2012 presidential race; things like number of views, subscribers, and even number of searches. YouTube has been trying to edge its way into the politics scene for a while now, even organizing a virtual town hall where users can watch clips and even vote in polls. While this channel may not be for everyone, it’s sure to be great for people who’d want this kind of stuff all in one place.

Check out YouTube’s pitch for the channel after the jump.