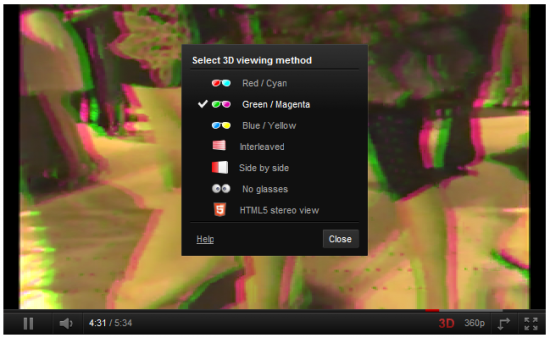 In the wake of adding an in-browser editor so users can edit video on the go, YouTube is now rolling out a beta feature that will allow you to convert your videos from 2D to 3D. Yeah, that’s happening. YouTube, aware that 3D video is a thing and that hardly anyone has hardware capable of actually shooting it, decided that they might as well try their hand at 2D to 3D conversion, and although it’s still in beta, it seems like it might be pretty legit.

In an attempt to make this feature as widely accessible as possible, YouTube is supporting pretty much every 3D option available, 3 colored-glasses options, interleaved, even cross-your-eyes side-by-side view. Unfortunately, I don’t have the capability of testing anything except the cross-your-eyes version, but that seemed pretty alright despite the fact that it gives you a little bit of a headache by its very nature.

Videos that have been 3D-converted will have a little 3D icon at the bottom that, when clicked, will bring up the 3D options menu. From there you can test out all the different methods and settings and see how it feels. It’s easy to convert a video you uploaded to 3D as well. All that you need to do is look at the video, hit “Edit Info,” enable 3D, and YouTube’s conversion algorithm does the rest. Beware though, when you’re enabling 3D on the user side, the menu can get a little annoying and you may find yourself scrubbing or pausing the video when you didn’t intend to.

I definitely recommending playing around with it and at least seeing what all the 3D options are, even if you can’t necessarily use them all. While it probably isn’t going to look professional grade (because it really isn’t) this is a step in the right direction for 3D video footage, I think. If we can find a way to make 2D to 3D conversion work well, it means that 3D videos won’t have to define themselves by being 3D and throw baseballs at the camera or whatever. Should be interesting to see where this goes. Play with a 3D-enabled video here.