Your Videos Are Boring. This Algorithm Can Help By Automatically Trimming the Boring Parts 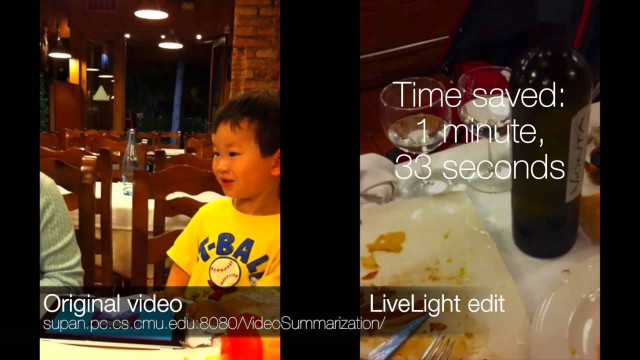 So your dog does this really cute thing, and you want to get a video and throw it up on YouTube. You get your camera and dog ready and start rolling, but he just won’t do the cute thing. Finally, he does it! Yeah! Most of what you just shot is boring, and a new algorithm can automatically edit it, leaving only the best bits.

LiveLight was developed at Carnegie Mellon University, and it analyzes video footage and judges whether any given portion is interesting. If it isn’t, it gets trimmed from the video, leaving only the parts that matter. At least, that’s how its supposed to work. Here’s a video example comparing an original video to the LiveLight-edited version.

Besides tightening up videos of adorable children and pets doing adorable things, LiveLight can also serve to help law enforcement by quickly analyzing long clips of surveillance footage, dashboard cam recordings, or other video. Of course, in its current state, LiveLight still takes quite a bit of time to process a video. Carnegie Mellon says the program can analyze an hour of raw video in “1-2 hours” on a conventional laptop.

That means LiveLight might be a convenient option, but it’s not necessarily a timesaver if you need to analyze one video for a specific event like a crime. In the long run, though, it could save time. If there’s more video to be analyzed than people to analyze it, running it through LiveLight could be a solution. More powerful systems would obviously also reduce the time needed to process video.