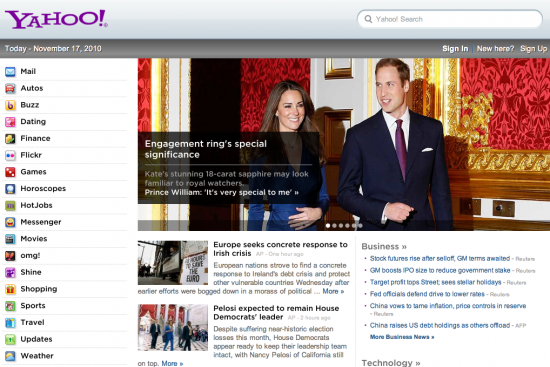 The buzzier likes of Google, Facebook, and Twitter, have their every move obsessively scrutinized, but it’s worth highlighting when a less trendy old Internet vet pulls off something forward-thinking and gets it really right. Yahoo has quietly launched a new homepage for tablet computer users, which you can check out at http://www.yahoo.com/tablet. If you’re on a non-tablet computer, it loses something in translation, but viewed from the 9.7-inch screen of an iPad, it not only looks pretty, but provides a touchscreen-savvy functionality that’s still lacking on most of the web.

Also cool and new from Yahoo: Its recently launched Yahoo Clues application, which lets users track trending search terms, with an additional layer highlighting the demographics among whom different searches are most popular.