"Everything that has a beginning has an end." -Google (I think) 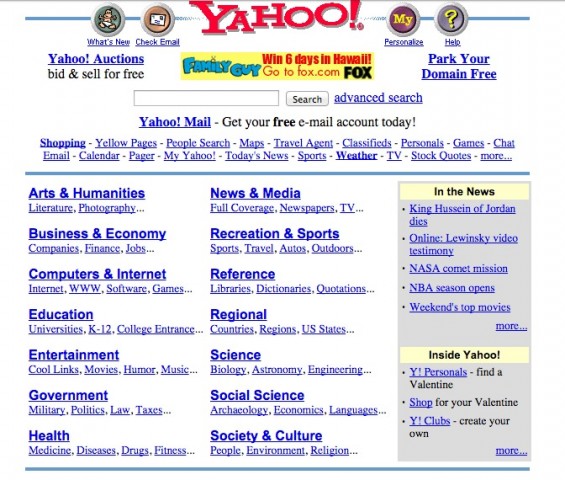 Yahoo is feeding your “I’m so old lololol” addiction with an announcement that they’re finally shuttering the service which gave Yahoo its start in the first place: YAHOO!

No, that’s not me yelling Yahoo at you, though I can understand it’s hard to tell with a company that spells its name out in both caps and with an exclamation point. (Geez, Yahoo, we get it.) No, YAHOO is all caps because it was originally an acronym which stood for “Yet Another Hierarchical Officious Oracle” and was the name of a page of curated links to help people find interesting things on the Internet. According to About Technology, the acronym was made to fit the word “yahoo,” because its founders liked the word’s definition of, “rude, unsophisticated, uncouth.” Like constantly yelling your company name with two forms of emphasis.

Seriously, I started this search in 1999.

But now, such a thing doesn’t really have a use anymore, because search engines are great and now the only people who manually curate information on the Internet are snarky nerds.

So, Yahoo announced on a service they own that people still use and care about (Tumblr) that they’d finally be closing down the Yahoo directory to focus on things people actually like and use such as Tumblr and saving Community—er, Yahoo Screen, I guess. They’re also closing down Yahoo Education (on September 30) and service which creates videos from users’ camera rolls called “Qwiki” (on November 1) along with the directory at the end of 2014.

Here’s some more nostalgia for the road: YAHOOO-OOOO!