xkcd not Fans of HDTV 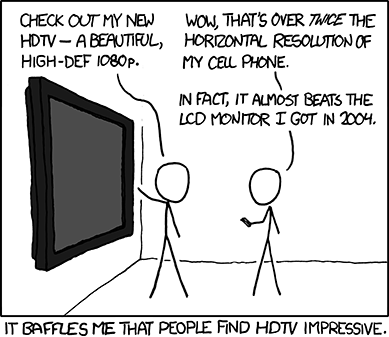 In today’s xkcd, Randall Munroe takes on one of the great consumer tech inducers of nerdrage: Namely, HDTVs, and their decidedly non-earth-shattering resolutions.

As one commenter on the xkcd forums points out, “most laptop screens are, in fact, HD. A lot of laptops screens are currently 1280x800px (16:10) – perfect for 720p content. Though there aren’t a ton of laptops that actually have 1920x1080px resolutions, almost all laptops are well suited to view HD content (a lot better than some people’s giant TVs).”

And don’t even start on framerates:

Ironically, regular old TVs (and computers) from the pre-HD era typically convert 24fps video to 50 or 60 Hertz, a rate at which visual artifacts aren’t nearly as big a threat: In the name of providing a ‘cinematic’ look, Blu-Ray movies and the like are actually regressing in framerates.