Fiction Within Fiction: The Making of the X-Men Comic That Appears in the Logan Trailer

There’s one particularly meta moment in the latest Logan trailer, and it’s when Logan picks up an X-Men comic that apparently belongs to X-23 and says with a slightly dismissive tone, “We’ve got ourselves an X-Men fan.” X-23 stares at him in silence, as Professor X gives her a sidelong glance, gauging her reaction. Logan flips through the pages of her comic book, and has this to say about the events depicted therein: “Maybe a quarter of it happened. And not like this.” He shakes his head slightly, then throws the comic book downwards. “In the real world, people die.”

Hmmmmmmm. So … X-Men comics exist in this world? (And a child soldier and/or government experiment and/or clone of Wolverine has the ability to access them and read them, apparently?) This introduces some weird complexities about how the X-Men are seen within the universe of Logan—which we already learned yesterday takes place in a “slightly different universe” than the rest of the X-Men canon (and, of course, we don’t know what that means yet).

Here’s what’s really cool, though: the comic that Logan holds up and shows off to the camera in this movie isn’t actually a real comic that we can buy in our world. It was designed specifically for the world of Logan. Comic book writer and artist Joe Quesada worked with comic book artist Dan Panosian to put together the issue that would appear on-screen. Quesada put up a Tumblr post today showing off the early drafts of the pages, writing, “It was a blast working closely with [director] James Mangold on creating these pages (yes, there’s more than one) and thrilled to have been invited on the project. Attached are my final digital pencils that Dan Panosian had to recreate in a more 90s ink and coloring style and boy did he nail the look!” 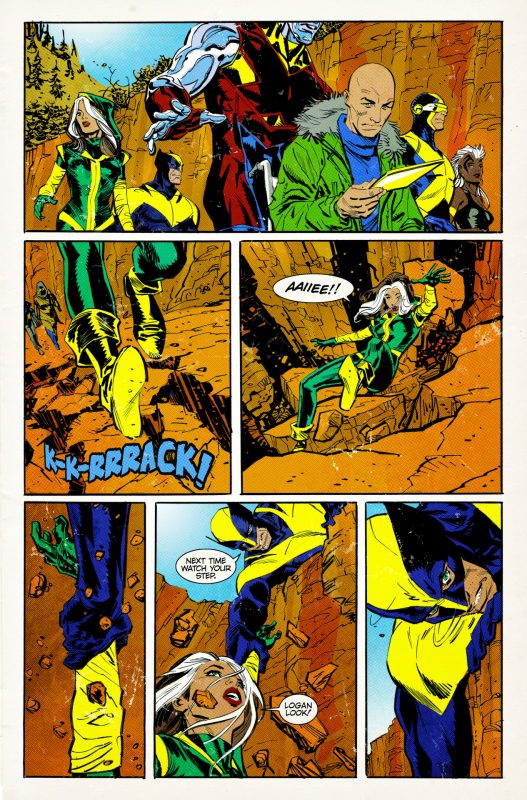 On the page, we see Rogue, Wolverine, Colossus, Professor X, Cyclops, and Storm hiking together through a rocky desert canyon. The terrain is crumbling beneath them as they walk, and at one point, Rogue trips and nearly falls into a small rift in the rocks. Wolverine reaches out to take her hand, cautioning her, “Next time, watch your step.” She cries out, “Logan, look!” They both look off-panel to something that should appear on the following page … but, of course, we may never know what they’re looking at, since there’s just this one page available to us.

In the trailer, though, we can see that there is at least one other page that precedes this one, although Quesada only uploaded this one page to his Tumblr since it appears in full in the trailer. I’m not sure if they just drew those two pages that appear side-by-side in the trailer, or if there’s going to be an entire comic book issue, or what. For all we know, it’s an entire standalone issue and it’ll connect somehow to the events of the film, perhaps even explaining what the heck is going on in Logan‘s mysterious future.

What’s also interesting to me is the very specific decision to mimic the ’90s art style and costumes for all the characters. I wonder if that means that X-23 has old copies of comics that came out long before she was born—particularly since this movie is set in a post-apocalyptic time period for the X-Men.

Perhaps someone gave her these comics as a gift … maybe even her surrogate mother, Dr. Sarah Kinney, who served as one of X-23’s only role models in the early days. (Based on the IMDB page, though, it doesn’t even look like Sarah Kinney will be in this movie, which is a shame!) It’ll be interesting to find out how X-23 ended up with these X-Men comics in particular, and whether they ended up changing how she views superheroes as a concept … and whether she hopes to one day join the X-Men.

(via CBR, image via screencap)