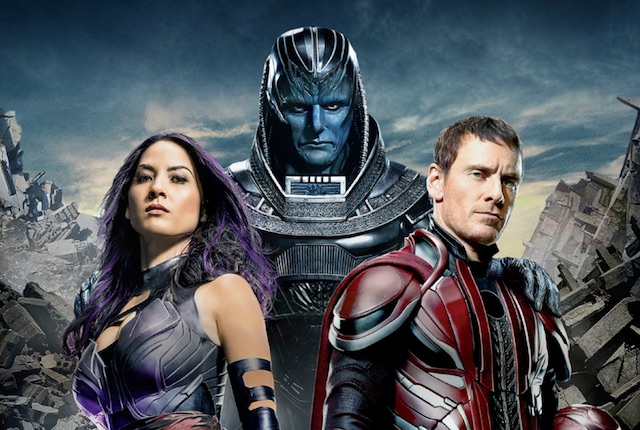 Somehow, it’s May, and I’ve seen all three superhero tentpoles for this year. Sure, we still have Suicide Squad in August (the classic untested film adaption to anchor the summer) and November’s Doctor Strange, but the big blockbusters came shockingly early this year. Now that I’ve seen X-Men: Apocalypse, I can wrap my head around this year’s trend of the war between superheroes. X-Men: Apocalypse is right alongside Batman v Superman and Civil War: overstuffed but underwhelming.

The X-Men franchise is an interesting Hollywood phenomenon. The movies seem to stay out of the great DC/WB vs Marvel debate (despite being Marvel at Fox). It and Spider-Man essentially launched the superhero movie trend, but while Spider-Man is preparing to reboot a third version, X-Men’s been circling the same universe for over 15 years. Even First Class, which initially seemed like a reboot, turned out to just be a prequel, with Days of Future Past both a prequel and sequel to the earlier trilogy. That’s an impressive accomplishment for a film franchise, especially considering how the franchise recovered from the mistakes of the third, Last Stand, but that also means continuity is vital. And as my friend said right after watching, someone dropped the ball with this movie—I don’t mean continuity within the comics, but as a film within this specific franchise. The movie is a mess of contradictions, which seems (like last year’s Spectre) more interested in fan service than telling the next chapter in the X-Men film franchise as a strong movie.

I went into the movie knowing very little about the Apocalypse character. I knew he was ancient, once died, and Oscar Isaac would be playing him (honestly, that last fact was a big selling point for me), and there’s a lot to like about Isaac, who is one actor who has no problem going big. Literally and figuratively, that’s exactly what he does here, coming close to the drama levels of Nicholas Cage (not quite, but close), but maybe going a little bigger than his tour de force of weird overacting known as Sucker Punch. Basically, Isaac seems to enjoy being a big ham, and I enjoy watching him be a big, overdramatic performer.

I also enjoy watching that side of James McAvoy, and while he’s nowhere near Victor Frankenstein or MacBeth levels of high drama, he gets a few moments to show his ability to add his own kind of flourish or two. I also think Michael Fassbender’s dark intensity (that Magneto staring daggers look still works), offers a nice contrast to McAvoy’s theatricality in these films. It all works well within X-Men’s epic approach to storytelling, standing out by going bigger in a different way. The start of the movie feels like an old-fashioned Hollywood epic (and looks a heck of a lot better than Exodus or Gods of Egypt) and wants to set the tone for a big, epic summer movie. Taking that approach is smart for the X-Men franchise, making it feel uniquely cinematic and on a different level than any of the other superhero movies it will be competing with. Even John Ottman’s editing and composing can best be described as wonderfully bombastic.

But the problem is that the first two films in the first franchise (I can’t get into Last Stand) aren’t as big and bombastic and melodramatic as the more recent ones. Because of that, the introduction of Scott Summers (Tye Sheridan) and Jean Grey (Sophie Turner) becomes a problem. Their storylines as the new students at Xavier’s school makes them seem pedestrian next to returning cast members (including significantly more work from Evan Peters as Quicksilver). Sheridan and Turner seem a little out of place, but only because they’re matching the performances of their characters’ predecessors, rather than this movie’s tone. Kodi Smit-McPhee (who was so great opposite Fassbender in last year’s Slow West) is introduced as Nightcrawler, and while he matches Alan Cumming’s take on the character, Cumming tends to be a pretty theatrical actor, so it fits in here.

Alongside Isaac and Fassbender as the villains this time are Shipp, very good as a teenage, bad-ass Storm (who sidesteps introduction problems by being aligned with the villain), Ben Hardy as Angel (they dropped Ben Foster’s version entirely), and Olivia Munn as Psylocke. Munn, a casting choice I was interested in seeing, is oddly underused, and they don’t have a firm grasp on her powers or role within the villain group. I asked my X-Men-aware friend why she just seems like a Wonder Woman rip-off (including a lasso), who told me she’s nothing like that in the comics. They seem to have left out most of her psychic powers (or underwritten those powers) so they could emphasize the physical side of the character. I’m not saying you have to stick with the comics all the time, but why make changes that just make her less interesting? Munn is still an undeniably charismatic presence and deserving of a franchise interested in utilizing her enthusiasm for action. She clearly wants to be here, which is more than I can say for Lawrence, who couldn’t be closer to a yawn when she has to give monologues in the Mystique make-up, although she’s much better as plain-clothed Raven.

By far, the best villain in this movie still happens to be Fassbender’s Magneto, and Singer still seems to like giving him rich material to play that goes beyond action. A sequence in a forest will certainly be the moment people remember, and it happens to be one of the simplest, but then they undercut some of that goodwill from using subtle imagery and subtext about Magneto’s history when they go to Auschwitz and just become literal. Even Fassbender seems surprised that they are doing this kind of scene, but as jaw-dropping as it is (and understandably offended as many were), that is one scene within a long movie.

And the big, silly stuff that gets played out with absolute commitment to the X-Men world makes for pretty delightful moments. Nicholas Hoult has never been more earnest, Peters might have an even better technical sequence as Quicksilver than he did in Days of Future Past, and Byrne and McAvoy still have good chemistry. There are some visually stunning moments, especially their decision to embrace color and light, but the sequences don’t come together to create a completely satisfying movie. It’s rarely hard to watch, but it also isn’t a pleasure. Apocalypse seems more like a mutant version of Ultron, and like Age of Ultron, the logic comes apart as the film loses interest in following the villain’s mission. Also, after all the talk about collateral damage, what exactly happens around the world is treated like an inconvenience.

It’s also hard to not see the missed opportunities on screen sacrificed for elaborate set pieces. At a point, I forgot Sheridan’s Scott and Lucas Till’s Alex Summers were brothers, because the movie makes no effort to create a strong connection between the two, which is a huge mistake if they want any emotional resonance. Turner (who I didn’t even recognize from Game of Thrones) is a little underwhelming as Jean Grey (although she has a really good moment towards the end), and again, it’s easy to forget she’s supposed to have a romantic connection to Scott. The villains need more time to gestate before joining Apocalypse as nothing more than henchmen, and then of course, the cultural relevance of the 1980s is underplayed significantly, using cultural references for humor more than political-social commentary. By now, we’ve spent so much time with characters people like and are familiar with but rarely explore more about them or venture away to get to know new ones. There’s also a sequence that will have some cheering and others questioning why it’s even in the movie; to me, it’s the definition of mandated fan service.

Ultimately, I left the theatre feeling that the franchise may just be suffering from everyone’s new favorite buzzword: superhero fatigue. I don’t feel the spark or passion for these characters anymore from Singer, and the ongoing tension between Xavier and Magneto is starting to feel a little played out. For a movie about a mutant trying to bring about the complete end of the world, there’s a lack of dread. I didn’t like Deadpool, but I think the success of that film could help move X-Men in the right direction and give the marquee names a breather. Take the Star Wars approach and have smaller stories within the universe that look at lesser-known characters. This specific franchise may need to take a breather to regroup in order to move forward with renewed inspiration, without completely destroying the foundation they’ve already built.