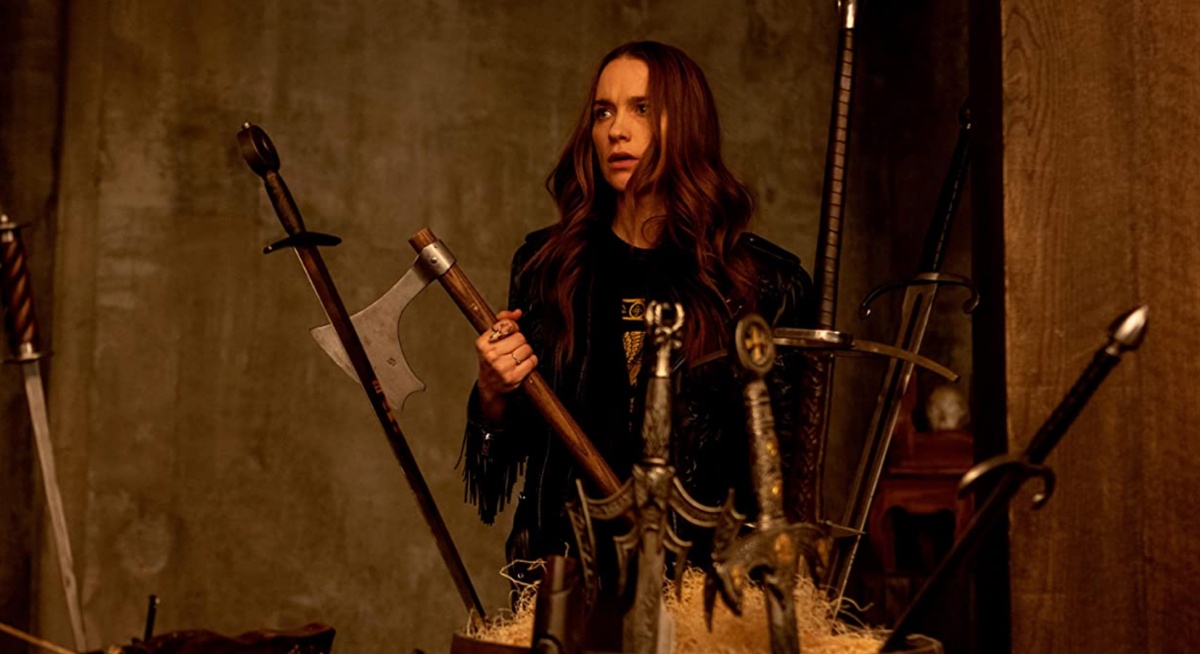 The midseason finale of the long-awaited fourth season of Wynonna Earp has wrapped up, and it delivered some of what I think is the best and the most frustrating aspects of the series. But let us start with what is absolutely the joy: WayHaught.

As I sip from my WayHaught mug, I can say with delight that their love and relationship remains a constant good in the series. Nicole and Waverly’s epic big love for one another is truly heartfelt. I couldn’t help but smile as Waverly kissed all the frogs because honestly, their relationship is a pretty fairytale romance.

I appreciate that the show didn’t shame Nicole for her distress at making a deal with the Swamp Witch, Mam Clanton. I think every character in Wynonna Earp has made emotionally foolish choices. I think that if the love of my life and my closest friends vanished for 18 months and there was something I could do, even if it was morally grey, I would at least contemplate it. Plus, now they are officially engaged, and I love it for them. May the splendor of Niecy Nash fall upon them.

Wynonna Earp is often at its best when it has the lead characters being morally grey, and with Wynonna and Doc, we get a lot of that grey being brought to the surface.

Part of the conflict this season has been the blood grudge between the Earps and the Clantons as a result of the Gunfight at the OK Corral in 1881. However, I was honestly often confused about this conflict because while I know it was a famous shootout, the details of it (and frankly much of the historical Earp stuff) sort of goes over my head. So, for those who were also wondering what the OK Corral was and what exactly happened, here is a quick summary.

In the Wild Wild West (wicka wild wild), there was a feud between two groups, with Cowboys Billy Claiborne, Ike and Billy Clanton, and Tom and Frank McLaury on one side, and Town Marshal Virgil Earp, Special Policemen Morgan and Wyatt Earp, and Doc Holliday on the other side. (There were lots of Earps).

The Claibornes, Clantons, and McLaurys were bandits and cattle thieves, which was a big deal back in those days, and their constant scuffles with the Earp family business caused a lot of smaller incidents. Eventually, the gunfight happened, and Virgil and Morgan were wounded, with Holliday grazed by a bullet. Tom and Frank McLaury died, along with Billy Clanton. After the shootout, Virgil and Morgan were murdered, and Wyatt went out for revenge against those responsible.

So, that is part of the history that fuels this fictionalized modern version of the feud. I add this all in because I honestly felt lost half the time, and I felt like they could have spent more time explaining what all of it meant.

We find out that the Clantons were the ones who were going to buy Wynonna and Doc’s daughter, Alice. That, more than anything, seems to be the motivation when Wynonna shoots Holt Clanton in the back, (seemingly) ending the blood feud but also loosening the ties between her and Doc.

As someone who has never loved the Doc/Wynonna relationship, this scene especially made me miss Dolls. I feel like if anyone would have comforting Wynonna and understood why she took that shot, it would have been him. We can see that Doc feels haunted by his bloody past and wants to live a life of honor, but his honor isn’t Wynonna’s.

Whereas Doc was an active part of this history, Wynonna has inherited it. She didn’t start the Earp curse. She didn’t shoot anyone that day in Tombstone, but she is repeatedly asked to take on everyone else’s actions. It makes sense that she does not believe in the same honor that Doc does. It’s a fine conflict, but after four seasons, I feel like they are always in the same emotional space of just disappointing each other.

Plus, Wynonna has honor. Her honor lies in her ability to protect her friends, the loyalty to her people and townsfolk, and the promises she keeps. I don’t think it’s a coincidence that she forgives Rosita and kills Holt in the same episode. She can understand Rosita is a survivor, but she probably cannot relate to the Clantons carrying on a blood feud just because it’s their history. Wynonna wouldn’t let something like that make her a baby snatcher, so for them to do it removes their right to honor.

Is it fair? No, but I get it. I’ll be interested in how she, and now Waverly, both deal with the fact that they are very willing to be killers if it means protecting the people they love.

When it comes to queer POC representation, I feel like Wynonna Earp is one step forward, and then a delay. I am glad they have added the character of Rachel Valdez because she is a delightful character, but as a teenager, she feels sort of out of step with the rest of the cast. But I’m hoping she can do what Dawn was not able to and become fully integrated into the story without feeling like a non-white backdrop on a mostly white cast. This is what Jeremy continues to feel like, and what Rosita’s return also felt like to me.

Jeremy has not developed as a character and is constantly around to help and support the white cast. He is even there just shipping WayHaught with the rest of is, which I get, but after two seasons, I just want there to finally be more to him than just the smart brown helper. Robin needs to come back in the second half of the season because Jeremy needs a person of their own.

Wynonna Earp carries on the Buffy legacy in its own way. The show’s mythology can feel a bit rushed at times, but the heart is there and it works. My biggest issue with the show remains the same: It needs more diversity—not just onscreen, but in the writers’ room because, as we saw with the live-stream incident with She-Ra showrunner Noelle Stevenson, having an all-white writers’ room sometimes allows you to feed into internalized stereotypes without realizing it.

I’m looking forward to a lesbian wedding when the show returns, hopefully, the return of Kate, and just more Earp fun.