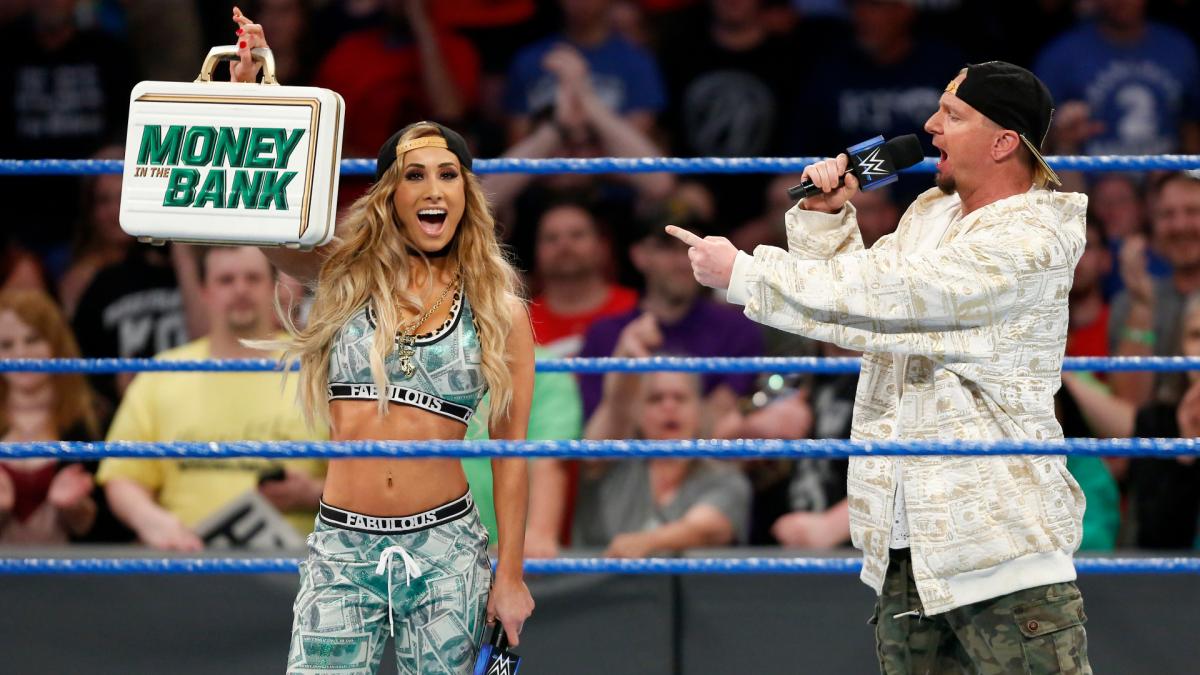 Last month on June 18, the women of the WWE made history by competing in the company’s first ever women’s Ladder match. Men have been competing in WWE Ladder matches since 1992 when Bret Hart fought Shawn Michaels for the Intercontinental Championship. When the Ladder match was introduced in the WWE, it was unimaginable that the company would ever feature women competing in such a match—that’s because at the time the WWE didn’t even have an active women’s division. The company reinstated its women’s roster and Women’s Championship in 1993, but it wasn’t until two years ago that it became a normal thing for WWE’s female wrestlers to perform in matches with major stipulations.

So at the Money in the Bank pay-per-view Carmella, Natalya, Tamina, Becky Lynch, and Charlotte Flair prepared to further change the landscape of the company with their Ladder match. It was a historic moment and the WWE knew it, as evidenced by the video package shown before the match, and how every female athlete in the company has taken to getting on the microphone to talk about being part of a revolution. So given WWE’s awareness of how they currently portray female wrestlers, it was especially baffling how this match ended.

Carmella’s manager, James Ellsworth, wound up being the one to ascend the ladder and grab the title contract, tossing it to Carmella to give her the victory. A villainous character cheating to win is par for the course of wrestling. But leaving aside that entertainment aspect, many people involved in the profession, as well as many fans, couldn’t help pointing out how tone deaf it was for a man to get the win for one of the women in the first match of its kind. 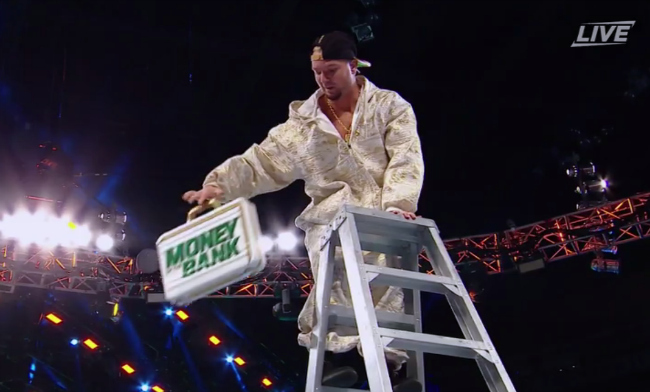 It’s possible WWE knew they’d get backlash for the move since the company has embraced causing controversy in the name of attention on many an occasion. And to be fair, the controversy was brought up in the storyline and Carmella was forced to win a rematch of the Ladder match two weeks after the pay-per-view to keep her title contract. Carmella actually grabbed the contract herself on the do over, but even with that it can never be erased that people will always look back and say a man determined the winner of the first women’s Money in the Bank match.

Whether WWE orchestrated this on purpose or not, it feeds into a bigger problem that has people questioning the integrity of the company’s commitment to their female performers. WWE’s current roster of women is undeniably great and the most talented female wrestlers they’ve ever had. The likes of Sasha Banks, Charlotte, and Asuka are all incredible to watch. And the company is only going to have an influx of more talent thanks to their Mae Young Classic tournament. But WWE’s fixation on creating historic moments with the women has a lot of fans feeling like the company is devoting too much effort into making headlines with the moments rather than creating stars out of their female athletes.

A great example of this came from another first ever women’s match that happened recently: the first women’s Kendo Stick-on-a-Pole match at Extreme Rules. Matches where objects are placed on a pole are seldom fondly remembered in the first place, but this bout between Bayley and Alexa Bliss for the Raw Women’s Championship has become a contender for the worst match of the year so far. That’s because despite the history of this first ever match, it was a total disservice to Bayley.

In the lead up to Extreme Rules the villainous Alexa Bliss ridiculed Bayley as being too childish to be a wrestler, even drudging up people from Bayley’s past who claimed she was so coddled by her dad that she’s never kissed anyone before. A storyline like this normally results in the hero proving the villain wrong by beating them down come time for the match, even if the villain ultimately finds a way to win. Instead, Alexa easily beat Bayley at Extreme Rules in around five minutes because Bayley was so naive and soft-hearted that she balked at using the kendo stick against Alexa. It turned the history of this match into something no one would want to remember: the night when one of the company’s biggest rising stars lost her momentum because Alexa’s accusations of Bayley being too sheltered to cut it seemed to have been proven correct.

Just two years ago, Bayley was perhaps the most popular woman in the company. She was recently on an out of character podcast with Steve Austin where she voiced her doubts about the trajectory of her character. Bayley seemed to struggle to understand what had changed between her and the fans, whose enthusiasm for her huggable persona has begun to wane. Judging by how Bayley was booked in her match at Extreme Rules, a lot of fans feel confident pointing the finger at the WWE as the problem for mismanaging her character. 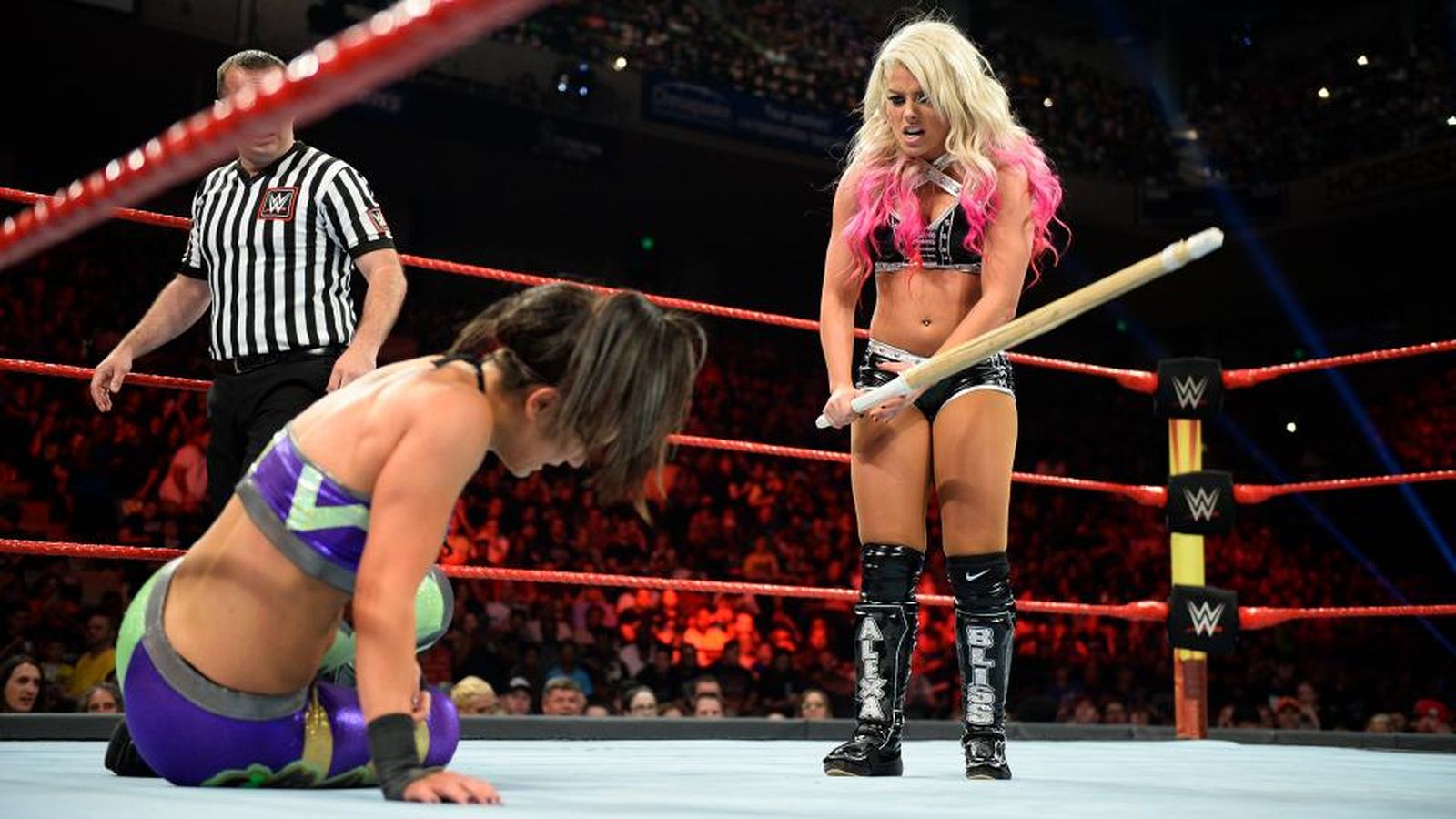 Being fair to the WWE, they have helped the women break other glass ceilings with better results. The women also had their first ever Gauntlet match recently, which was fine. And Asuka also recently defended her NXT Women’s Championship against Nikki Cross in a first ever Last Woman Standing match which was great. If the quality could stay consistent, there’d be no room for complaint. But so far we’re seeing a lot of first ever moments and talk about a women’s revolution that winds up feeling hollow

The most recent Tables match I mentioned? Or the most recent Cage match? The first women’s Hell in a Cell (which was also the first time women main evented a pay-per-view)? All of those matches were just okay when they could have been phenomenal. All of the women involved in those matches have proven they can shine in the ring, so it’s not a lack of talent. So that leaves the writers and producers who are putting together these matches as the ones that aren’t doing the women justice.

Any WWE fan will be sure to point out bad booking isn’t confined to the women. Plenty of excellent male wrestlers are wallowing in mediocrity right now (Shinsuke Nakamura being a glaring example). But the men’s division as a whole (their floundering cruiserweight division aside) doesn’t face any jeopardy of being taken off the match card.

There have been times in WWE’s history where they simply scrapped featuring women’s wrestling for years, though. Despite how manufactured WWE has made the phrase “women’s revolution” sound by turning it into some dorky buzzword, there is still truth in it. The current crop of female wrestlers have only been getting treated seriously for a couple years now coinciding with the call ups of Sasha Banks, Becky Lynch, and Charlotte. Before that was a dark period of years of women’s matches that could feature inadequately trained models wrestling for less than five minutes. It’s not like it’s impossible for things to revert back to the way they were if the current women are deemed a dud.

Fortunately most of the women are still connecting well to the crowd. And the WWE’s problem right now isn’t that they don’t care, but rather that they’re trying too hard to force things. So hopefully we’ll see many more of the great stories and matches the women have been in so far, and they won’t be overshadowed by stuff like Ellsworth’s involvement in the Ladder match. You only have to listen to the emotion in the voice of someone like Sasha Banks as she talks about how far the company has come from its days of putting on Bra and Panties matches to know what this opportunity means to her and the other women. And if that’s not enough, you can just watch the crazy moves someone like Charlotte busts out in big matches to try and steal the show.

The rumor right now is that the women might have another first on the horizon: the dirt sheets are saying a women’s Royal Rumble match might be happening at the Royal Rumble pay-per-view in 2018. If the WWE goes through with it and puts the work into creating the match the performers deserve, it could be one of the highlights of the year for the company. But it can’t be just another match to check off the shortening list of stipulations that women in the WWE haven’t competed in. Some of the strides the women’s division have made have been remarkable, but other attempts are leaving a lot to be desired. It’s time for the company to prove they’re out to do more than create PR buzz. Make the historic moments mean something by writing compelling rivalries for these characters, producing hard-hitting matches for them, and helping the WWE’s women achieve their potential of being some of the biggest stars the company has seen.

Chris Isaac writes from Philadelphia. He has covered topics ranging from video games, to the portrayal of mental disabilities in the media. When he’s not keeping up with wrestling, he writes regularly for Screen Rant and Comic Book Resources. Follow him on Twitter @ChrisChrosser.